COVID-19 Update: All entrances open daily, main gates from 7am - 7pm (click for details)
Putting a Face on a Tragedy
By Jeff Richman on May 7th, 2018 in Green-Wood Historian Blog, Uncategorized  |  1 Comment

One of the first monuments a visitor is likely to notice upon coming through Green-Wood’s landmarked brownstone Main Gates is the Brooklyn Theatre Fire Monument. It commemorates the tragedy of the evening of December 5, 1876, when 278 souls were lost after a crowded theatre in downtown Brooklyn caught fire and collapsed. That disaster marked the greatest on-land loss of life in what is now New York City up until the 9/11 attacks on the World Trade Center. 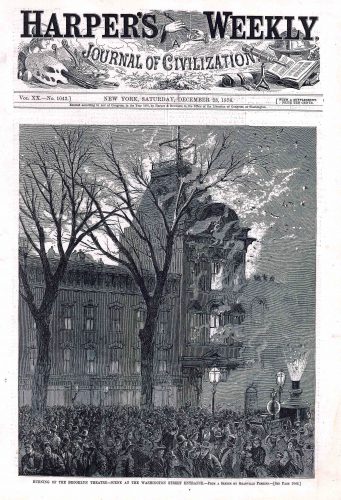 The front page of Harper’s Weekly, December 23, 1876, showing the Brooklyn Theatre on fire and the crowd gathered outside.

On Tuesday night, December 5, 1876, the Brooklyn Theatre, on the southeast corner of Johnson and Washington Streets in downtown Brooklyn, was packed with a thousand patrons. They were there to enjoy the phenomenally popular The Two Orphans, starring Kate Claxton (who is interred at Green-Wood). All went well until, just minutes before the play’s end, whispers of “fire” were heard from the wings. Scenery had come in contact with the open flame of a kerosene lamp–one of the footlights–and a fire started. Claxton, on stage, whispered to her fellow actors, urging them to calmly proceed with their lines while stagehands fought to extinguish the flames. But those efforts failed, and Claxton and the others went to the edge of the stage, where they joined hands as she reassured the audience, “We are between you and the flames.” She urged the audience to remain calm and to file out in an orderly fashion. But panic swept the balcony–there was only one staircase down and just five narrow exits. Within half an hour, the building collapsed.

The next morning, firemen began to sift through the rubble, expecting to find just a few bodies. It was then, as they came across victim after victim, that the tremendous loss of life became apparent. By the time their grisly task was completed, 278 bodies had been counted. 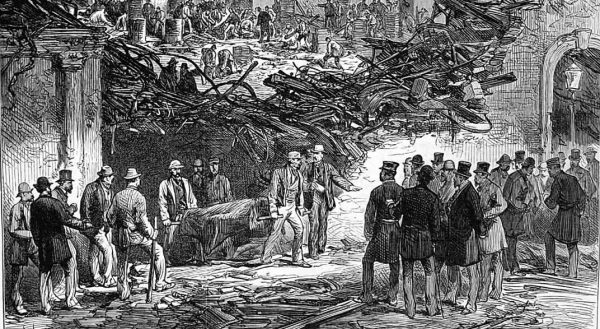 The Brooklyn Theatre, after its collapse, as bodies were carried from the ruins.

The first burial at Green-Wood of a victim of the Brooklyn Theatre Fire occurred on December 7. James Elliott, a 29-year-old married man who last lived at 482 East Baltic Street in Brooklyn, was interred on that date in public lot 17263, grave 1991. The City of Brooklyn went into mourning as arrangements were made for a mass burial at Green-Wood Cemetery in what was quickly designated the Brooklyn Theatre Fire Lot:  those whose family could not afford to pay for a burial or those whose remains had been burnt beyond recognition would be interred there.

In lots scattered across the grounds, a total of 50 identified individuals, all victims of the fire, were interred from December 7 to December 14, one or several each date. “Burns” was listed as the cause of death for each of the victims. For each of the 103 who would be interred in the Brooklyn Theatre Lot, no name was recorded; just this notation was made in Green-Wood’s chronological books:  “Unrecognized Body Burned at the Brooklyn Theatre.”

A woodcut of the morgue–candles were placed on each of the bodies to help loved ones see–and identify–the victims.

Just  days after the tragedy, cemetery workers dug a circular trench seven feet deep for a common grave. Hearses and undertakers’ wagons lined up on Saturday, December 9, to unload the donated silver-trimmed caskets. Twelve Green-Wood gravediggers lowered 103 coffins into the earth, arranging them with the victims’ heads facing towards the center.

Two thousand mourners huddled against a bitterly cold wind blowing off the bay as 60 singers sang Abt’s Repose. After two hours of speeches and ceremonies, 42 Green-Wood workers shoveled soil onto the coffins, and a floral crown and cross were placed on the mound, courtesy of the Germania Theatre Company. The soil in the center of the lot had been left undisturbed; it would soon be topped by a large granite obelisk upon which a description of the disaster would be carved on its four sides. 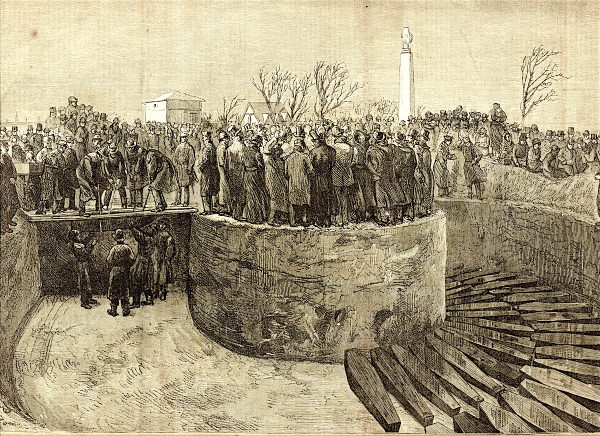 Burying the unidentified bodies in the Brooklyn Theatre Fire Lot at Green-Wood Cemetery.

This the Brooklyn Theatre Fire Lot at Green-Wood, with the granite obelisk in place: 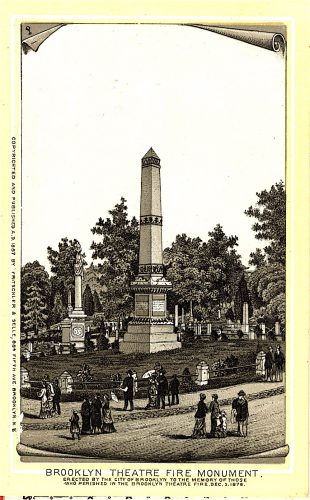 This image of the Brooklyn Theatre Fire Monument dates from 1887, just 11 years after the tragedy. It is from a souvenir booklet of Green-Wood Cemetery. 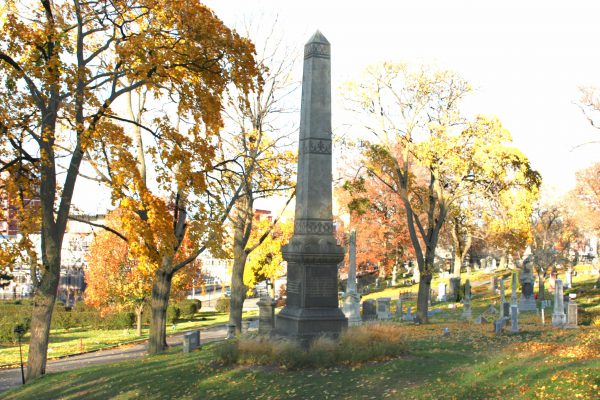 The Brooklyn Theatre Fire Monument, in a recent photograph, on a fall day.

Here is one of the four inscriptions on the obelisk that describe the tragedy: 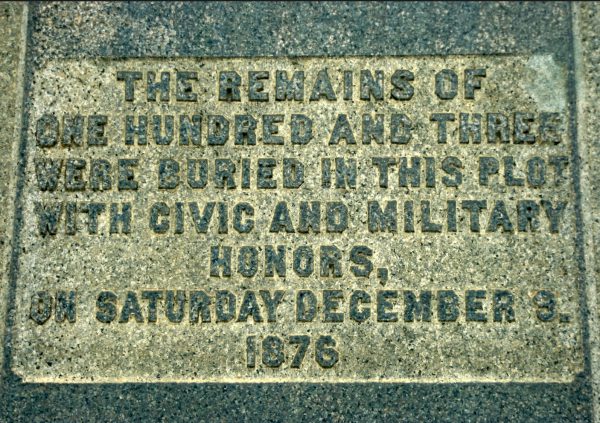 This inscription on the obelisk in the Brooklyn Theatre Fire Lot memorializes the 103 unnamed victims interred there.

In my 15 or so years of collecting photographs and other items on behalf of The Green-Wood Historic Fund, I have purchased many items relating to the Brooklyn Theatre Fire:  newspapers, woodcut prints, pamphlets, programs, cast photographs, stereoview photographs of the collapsed theatre, and more. So I was very intrigued when, just a few weeks ago, I came across an online auction listing:  “DONALD ROSE CDV PHOTO CIRCA 1870 KILLED IN BROOKLYN THEATER FIRE NEW YORK.” And here’s the fine print of the listing:

This is an interesting find in an old Civil War era photo album from New York City. The young boy is identified as Donald “Donny” Rose. He was born in Inverness, Scotland in 1861 and immigrated to New York City. He was killed in the famous fire at the Brooklyn Theater on December 5, 1876 and is buried in Green-Wood Cemetery in Brooklyn, New York. The photo dates to about 1870 and was taken at the S. H. Phillips Studio in Manhattan. The image is very clear. See scan.

I had never seen a photographic portrait of a one the fire’s victims. Could this be the first? Was it real?

I looked at the image itself: 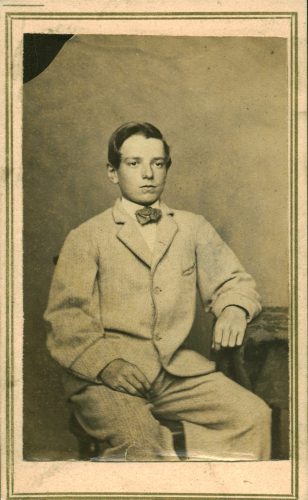 Carte de visite photograph, circa 1870. A young man, perhaps in his early teens.

Then I studied the back: 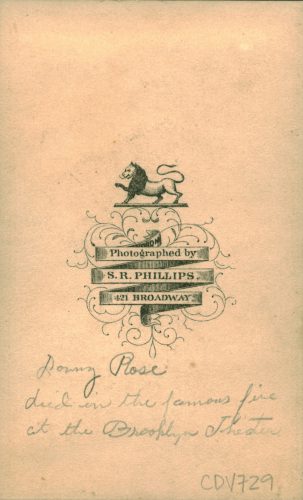 The back of the photograph.

I was a bit concerned about the penciled writing on the back:  “Donny Rose died in the famous fire at the Brooklyn Theater.” My first reaction was that the handwriting did not look 19th century–but that, of course, is a rather subjective judgment. I was also concerned that the last word was spelled “theater,” not “theatre”–as it would have been spelled around the time of the fire. I did recognize the name of the dealer who was selling this item–I have bought quite a few cartes de visite photographs from him, and have found him to be an accurate researcher–so that helped.

Before bidding on this photograph, I wanted to confirm that “Donny Rose” was, as stated in the listing, indeed interred at Green-Wood. However, when I searched the cemetery’s database, using several variations on the spelling of his name, nothing came up. I then put Jim Lambert, volunteer extraordinaire, to work on this. Jim searched Green-Wood’s chronological books–which list every burial at Green-Wood, from the very first in 1840, through those in 1937, in order of date. Jim started with December 5, 1876, the date of the fire, and went from there. No Donny Rose or Donald Rose.

Now Jim widened his search, checking the Brooklyn Daily Eagle, which had extensive reporting on this immense tragedy. Here’s what he found: 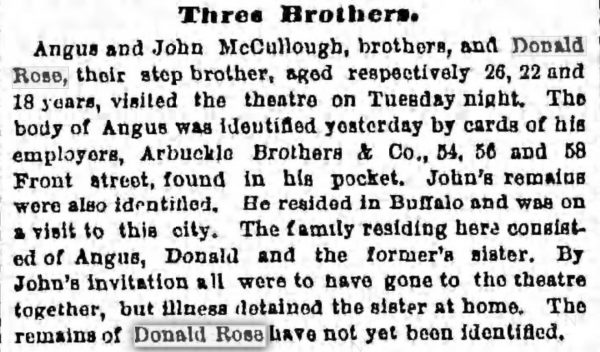 This note appeared in the Brooklyn Daily Eagle of December 8, 1876, in reporting titled “The Holocaust,” then subtitled “Biographical Incidents” pertaining to the then-recent fire.

And here’s a note that appeared in the Brooklyn Daily Eagle on the next day, December 9, 1876: 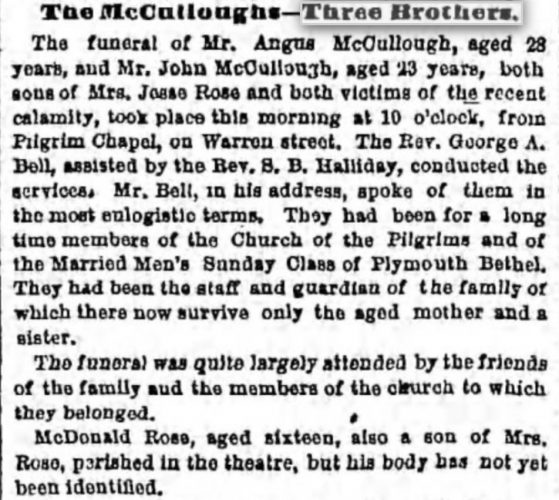 This article reports on the “Three Brothers” who died in the Brooklyn Theatre Fire.

As per the above report, a funeral was held for two of the brothers–Angus and John McCullough–on December 9. Though the above article fails to report on which cemetery they were interred in, we checked Green-Wood’s records and discovered that Angus and John were interred together on that same date in public lot 17263, grave 310. But note the final line in the above newspaper account: Donald Rose, whose photograph appears above, is identified here as “McDonald Rose”–and it is again reported that “his body has not yet been identified.”

And, when Jim and I went out to the grave of Angus and John, here’s what we saw:

The gravestone of the “Three Brothers.”

As per Green-Wood records, both Angus and John McCollough (as that last name was spelled by the cemetery recorder) are interred in this grave–lot 17263, grave 310, together. Both are recorded in cemetery records as having died of “burns” on December 5, 1876 at the Brooklyn Theatre. However, the inscription on this gravestone, towards the bottom, to Donald Rose is a cenotaph–a memorial to someone who is interred elsewhere–Green-Wood’s records for this grave list two and only two names as interred there: Angus and John. Not Donald.

All indications are that Donald Rose’s final resting place is just a short distance away, in the Brooklyn Theatre Lot, at the intersection of Battle and Bay View Avenues, in Green-Wood Cemetery. It appears that, though his family knew that he had gone to the Brooklyn Theatre on the evening of December 5, he never returned, and his body was one of those that had been so burnt in the fire that he could not be identified.

And yes, I was able to buy the carte de visite portrait of poor Donald Rose, a young lad, who died with his two brothers, in what was to have been a special evening of joy and entertainment, but turned into a night of tragedy.

One thought on “Putting a Face on a Tragedy”