Last week, I was finishing up work on a book, “The Gallant Sims,” A Civil War Hero Rediscovered, to be published on November 1 by the Green-Wood Historic Fund (it should be for sale in Green-Wood’s online store right around that date), with funding from Furthermore Grants in Publishing, a program of the J.M. Kaplan Fund. It is the fascinating story of a patriot from Brooklyn who served in the New York State Militia before the war, answered the call of President Abraham Lincoln to defend the nation, then served an the captain of Company G of the 51st New York Volunteer Infantry for three years, until he was killed at the Battle of the Crater on July 30, 1864. He is interred at Green-Wood in section 53, lot 12512, grave 648.

I have been enthralled by Captain Sims’s story for more than a decade. In 2007, I was able to purchase, on behalf of The Green-Wood Historic Fund, a collection of objects and papers pertaining to him. It was, in fact, a combination of two collections: one that had been cherished by his descendants for more than a century after his death, only to be put out with the trash upon the death of his last survivor and rescued in a nick of time, and the collection that came down through his fiancee’s family.

What is truly remarkable about this story is its many dramatic arcs. The men who served with Captain Samuel Harris Sims had a great love and admiration for him. They referred to him as “The Gallant Sims.” That love manifested itself in their adopting Captains Sims’s orphaned daughter–she became the “Daughter of the Regiment”–and they took up a collection to pay for her education at Vassar College. In 1880, the Confederate officer who had seized Captain Sims’s sword as Sims breathed his last wrote to the New York Herald in the hopes of finding his family and returning that sword. His children soon received their father’s sword. In 1886, an officer who had served with Sims was walking through Green-Wood Cemetery and realized that the grave of “The Gallant Sims” was not suitably marked. So, he dedicated himself to raising the funds for a granite obelisk that captures the respect and admiration his men had for him:

The monument includes this inscription:

WITHOUT FEAR AND WITHOUT REPROACH

The book will be heavily illustrated. The illustrations include three photographs of Captain Sims. Well, actually, now it is four. That is because, just as I was finishing my work on the book, I received an e-mail from Greg Di Salvio. I know Greg from events over the years at Green-Wood. Greg is a Civil War re-enactor who collects Civil War material and coins. His great passion is Daniel Mallett, a Civil War veteran. Greg owns Daniels’s diary and a tintype of him.

In his e-mail, Greg sent these two pristine photographs, telling me that one was of Samuel Sims and the other likely of Sims’s wife. They are published here for the first time: 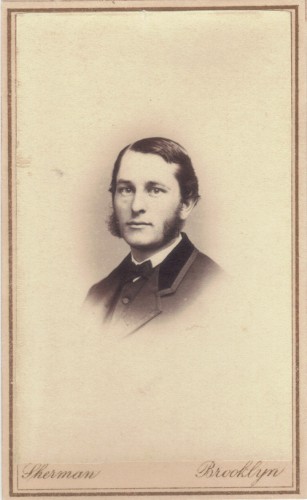 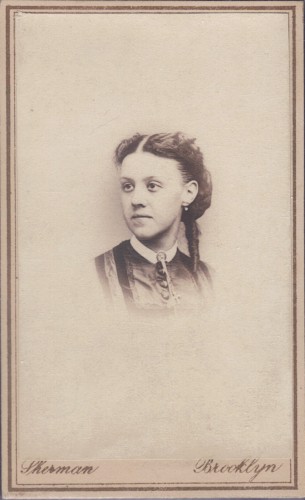 This e-mail from Greg got my full attention. Had there been divine intervention here–alerting Greg that my book was ready to go off to the book designer in just a few days–and that he should contact me? It turns out that the actuality was a bit prosaic. Greg is on The Green-Wood Historic Fund’s mailing list (as you all should be) and had seen on it my Sims book talk scheduled for November 12.

So let’s go back a bit. Back to 1997, that is. Greg tells me that, in that year, he was visiting family in California when he drove past a flea market. With some time to kill, he went in to look around. At one table he saw an old photo album. As he flipped through its pages, he came to one where this appeared: “Sims Family, Brooklyn.” Following that notation were several carte de visite photographs. Greg picked two out and, after negotiations, paid all of $13 for the pair.

When Greg saw, in Green-Wood’s fall schedule, that I was writing a book about Captain Samuel Sims, that name rang a bell for him. So he went deep into his storage closet–all the way to the back, where he seemed to remember those two Sims carte de visite photographs were. He found them just where he thought they would be.

Of course, Captain Sims’s first name was Samuel–a match for “S. Sims.” It looks like this man is wearing his Sunday best. Who would he have gone off with to Sherman, a Brooklyn photographer on Fulton Street, in that Sunday best? A likely answer: his wife. Samuel Sims married Mary Ann Titus in 1850. She died in December of 1860, apparently from the effects of child birth. These photographs likely date from 1859 or 1860–when cartomania–the craze for be photographed and collect carte de visite photographs–had just begun in America. This was just a few months before Samuel Sims went off to war in April, 1861. Though I know of no identified photographs of Mary Ann, I think it likely that this is her.

Is this Captain Sims? Sue Ramsey, who has been instrumental in making it possible to tell Captain Sims’s story, owns an identified carte de visite photograph of him. She has it in a safe deposit box–with a note on it that it is to go to The Green-Wood Historic Fund upon her death. Thanks, Sue–but no rush! Here are the photographs side by side–Greg’s at left and Sue’s at right. Compare the eyes, ears, nose, sideburns (Sims served under Major General Ambrose Bursnside, and admired him; it was after Burnside that sideburns were named) and chin. Note that the face of the man at right is thinner than the one at left–which makes sense; one would expect a soldier to lose weight while he living in the field, with decreased caloric intake and greater physical activity. My conclusion: the same man!

Greg kindly agreed to allow me to add the image of Samuel Sims and what may be an image of his wife to the book. Those images are already at the book designer’s. Greg then sold these two images to The Green-Wood Historic Fund. So they have now become a part of our Samuel Sims Collection.

6 thoughts on “Just in a Nick of Time: One More Captain Sims Photo!”