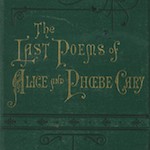 Sisters Alice Cary (1820-1871) and Phoebe Cary (1824-1871) were prolific poets of the mid-nineteenth century. Born in rural Ohio, ambition brought them to New York City, where they became influential figures in the literary community. Each published volumes of their own work and contributed regularly to national periodicals. The sisters hosted a popular salon in their New York City home in which intellectuals, artists and social reformers of the day would gather. Pictured here is a posthumously published volume of their poetry, The Last Poems of Alice and Phoebe Cary, released in 1873. Click the image to expand.