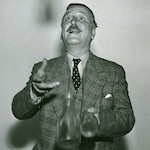 Francis Wupperman, better known by his stage name, Frank Morgan (1890-1949), will forever be remembered for his role as the title character in the Wizard of Oz. An eccentric and jovial character actor, Morgan was already a well-respected long before his 1939 role as “The Wizard.” His first film was released in 1916, over a decade before the first “talkies” were introduced. Sound films enabled Morgan to really flourish as an actor and he became highly sought after for both comedic and dramatic roles. In the accompanying photo, Morgan demonstrates his juggling ability, a skill he learned for a scene in his 1938 film “The Crowd Roars.” Click the image to expand.