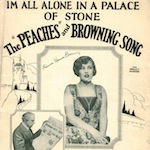 In 1926, Edward West Browning (1875-1934) entered into an ill-fated marriage with 16 year-old Frances “Peaches” Heenan. A successful real-estate developer in New York, Browning showered his young bride with lavish gifts. Less than six months after the wedding, “Peaches” sought a separation, citing odd behavior from her husband, including his insistence that a honking goose be kept in the bedroom. The ensuing trial made for a sensational news story. I’m All Alone in a Palace of Stone: The ‘Peaches’ and Browning Song was written about the scandalous affair. The lyrics describe Frances Heenan Browning as “one of many fools, who sold her love for jewels” who was “trying to care for an old millionaire, wasting the best of [her] years.” Click the image to expand.