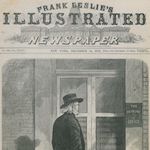 A solemn account of Horace Greeley’s (1811-1872) last visit to the office of the New York Tribune appeared on the cover of Frank Leslie’s Illustrated Newspaper in the weeks following his death. A well-known public figure, Greeley founded the Tribune and served as its editor for several decades. In 1872, Greeley resigned from the newspaper to run opposite Ulysses S. Grant in the 1872 Presidential election. After an unsuccessful campaign, Greeley returned to the Tribune, but would not remain much longer. November 13th would prove to be his final visit, as he immediately fell ill and spent the remainder of his life under medical care. Click the image to expand.