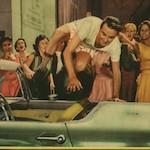 During the 1940s, male “crooners” dominated the music scene with their emphatically sentimental love songs. Alan Dale (1925-2002) emerged as a solo act in 1948 and was soon dubbed the “Prince of Baritones.” In 1956, Dale starred as a Rock and Roll singer in the film “Don’t Knock the Rock” alongside famed musicians Little Richard and Bill Haley and His Comets. Click the image to expand.