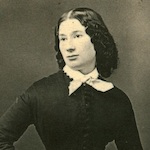 On the evening of April 14, 1865, President Abraham Lincoln was mortally wounded by gunshot while attending a play at Ford’s Theatre. Actress Laura Keene (1826-1873) was on stage that fateful evening, starring in “Our American Cousin.” A witness to one of the most infamous moments in American history, Keene is believed to have been the first to identify the assassin as fellow actor John Wilkes Booth. It is also widely claimed, though often contested, that the actress rushed to the President’s side just moments after the shot was fired, cradling his head in her lap as her dress became drenched in his blood.Click the image to expand.