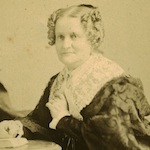 During the first half of the nineteenth century it was almost unheard of for a woman to practice medicine, but pioneering female doctor Clemence Lozier (1813-1888) played a major role in changing that. Not only did she excel in the fields of obstetrics and general surgery, she also encouraged other women to pursue medicine by founding the New York Medical College and Hospital for Women in 1863. Lozier further helped to make basic medical knowledge accessible to the average woman, hosting lectures in her own home and writing health books specifically for women. Click the image to expand.