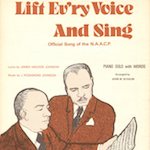 “Lift Ev’ry Voice and Sing,” also known as the “Negro National Anthem” and the official song of the NAACP, was written by Green-Wood resident and civil rights activist James Weldon Johnson (1871-1938). A prominent figure of the Harlem Renaissance, Johnson was a novelist, songwriter and poet. This famous song, which made its debut in 1900, was a collaboration between James and his brother, John Rosamond Johnson. James was the lyricist, and his brother composed the music. The Johnson brothers are pictured on the cover of this 1973 version of the sheet music. Click the image to expand.