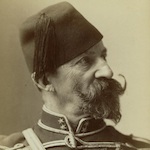 Napoleon Sarony (1821-1896) was a revered and highly successful photographer in the second half of the 19th century. His unique compositions featuring dramatic posing, a variety of backgrounds and props, and unusual lighting and shadows elevated photography to a new level. His portraits became fashionable and his portfolio features photographs of some of the most notable theatrical and public figures of his time from Sarah Bernhardt to Oscar Wilde. The Historical Collection contains Sarony photos of many Green-Wood residents, too, like Henry Ward Beecher and Samuel Morse. The self-portrait cabinet card of the photographer show above illustrates that he was quite an eccentric character. Click the image to expand.