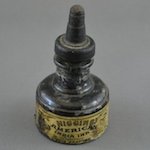 Charles M. Higgins (1854-1929) is credited as the creator of “Higgins’ American India Ink,” which was, at one time, the most famous brand of ink in the world. Pictured above is a glass bottle that once held the famous formula. Higgins invented his India ink and the also popular “Eternal Black Ink” while experimenting with inks in his sister’s kitchen. The original Higgins’ Ink Company, founded in 1880, was on Eighth Street in Brooklyn, not far from Green-Wood.

Green-Wood’s famed Minerva statue was commissioned by Higgins in 1920 to commemorate the Battle of Brooklyn of 1776, a historical event Mr. Higgins was passionate about and which, in his opinion, deserved memorialization. The Higgins mausoleum stands directly behind the statue. Click the image to expand.