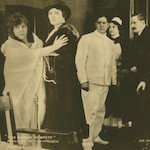 Florence LaBadie (1888-1917), was one of the first major movie stars, appearing in over 180 silent films during her short career. The actress tragically passed away in 1917, at the height of her career, following a car accident near Ossining, New York. Pictured above is a still from the 1917 film, The Woman in White, the last of LaBadie’s films released before her death. LaBadie played dual roles in the film, a surprisingly modern convention for an early silent film. In April 2014 Green-Wood installed the first monument to stand at the grave site of the silent film starlet who, mysteriously, was interred without a headstone. Click the image to expand.