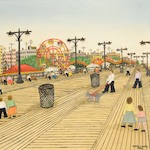 Vestie Davis (1903-1978) was a folk artist best known for his spirited paintings of New York City. Coney Island Boardwalk (1964), pictured above, is exemplary of Davis’s paintings. Although untrained in the arts, Davis managed to capture the rich and diverse scenery of the city, from one-of-a-kind landmark buildings and city centers to lively parks and beaches. Originally from Baltimore, Davis moved to New York City in 1928 and was immediately fascinated by its distinct architecture and culture. His artistic vision was to preserve the City that he loved in the face of a changing world. His style emphasized harmony and civility within the city’s social hubs while making use of bright colors and simple lines. Vestie Davis had a unique artistic career and did not begin painting regularly until he was in his forties. He was never trained in art, but rather spent his early years working as a circus barker, a newsstand manager, and an undertaker. Click the image to expand.