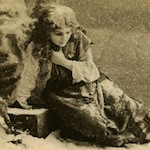 This Carte-de-Visite photograph was taken by eminent photographer and Green-Wood resident Napoleon Sarony (1821-1896). It captures famed 19th-century actress Kate Claxton (1848-1924), also a Green-Wood resident, in her signature role as Louise in “The Two Orphans”. Sarony pioneered the unique idea to replicate key moments of the theater by photographing actors in full costume, in a theatrical setting. “The Two Orphans” was one of the first plays he staged for photography. Shown here, Sarony captures the homeless Louise caught in a snowstorm.

Actress Kate Claxton was performing in “The Two Orphans” on December 5, 1876, when the tragic and massive Brooklyn Theatre fire broke out, claiming the lives of nearly 300 individuals. The monument to the fire is within a few steps of Green-Wood’s grand archway. Click the image to expand.