In 1907, opera singer Ada Eugenia von Boos-Farrar became the first person to have her singing voice broadcast on the radio. 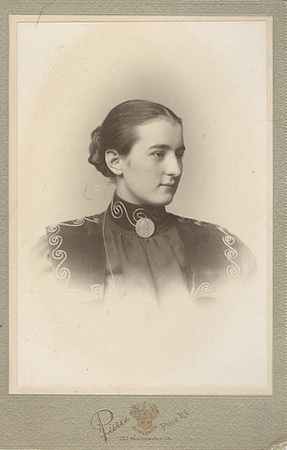 Eugenia Farrar, the first woman to sing on the radio.

Almost three years ago, in October, 2010, Eugenia Farrar’s ashes, after a ceremony in her honor, were placed into a ceramic urn in a  Green-Wood niche. Here is the blog post about that event.

Just last week, I was contacted by Melissa Dubbin and Aaron S. Davidson, who were involved in the 2010 ceremonies. They have a studio at the Brooklyn Navy Yard. Each day, on their way to work, they pass the now-quiet radio transmission towers of the 3rd Naval District’s U.S. Communication Center Headquarters. Those towers, when they were in use, allowed signals to be sent to U.S. submarines as far away as Puerto Rico.

Several years ago, Melissa and Aaron did some research on these towers and discovered the central role the Brooklyn Navy Yard had played in Eugenia’s broadcast: her singing, from a studio in Manhattan, had been transmitted out into the world–she had commented “Here goes something into nothing” just before she began to sing–and just by happenstance it had been heard by Oliver Wycoff, a 19-year-old seaman aboard the U.S.S. Dolphin, docked at the Navy Yard. Wycoff was testing the Dolphin’s new radiotelephones when he heard a singing voice. Oliver was surprised to hear what was, he believed, the voice of an angel.

Taken with this moment in history, Melissa and Aaron, in 2008, 101 years after Eugenia’s transmission, staged a radio broadcast of the song that Eugenia had sung, “I Love You Truly.” They transmitted the song from the Brooklyn Navy Yard, where it had been heard in 1907.

By happenstance, Melissa and Aaron, in 2008, discovered that Eugenia’s ashes had been given to Oliver Wyckoff, who had heard her angelic voice quite by surprise in 1907. When Oliver died, Eugenia’s ashes were given to the Brooklyn Navy Yard. In 2010, Green-Wood’s president, Richard J. Moylan, learned that her ashes were there and offered a Green-Wood niche as a permanent place for them.

The ashes had been stored at the Brooklyn Navy Yard in a simple metal can supplied by the Ferncliff Crematory in 1966. Melissa and Aaron took it upon themselves to create a proper porcelain urn for Eugenia’s ashes–with one twist. Not only would it have her name inscribed into the clay, but a recording of her song would also be cut into the unfired porcelain urn, “wrapping her in her own voice.”

However, they were unhappy with that urn: it was a bit out of round and the impression into the clay of Eugenia singing “I Love Your Truly” had not gone quite as well as they had hoped. So, since then, they have been working with a ceramicist to get a better urn, and they finally done so. They were ready to donate the new urn to Eugenia.

So, on Friday, Melissa came to Green-Wood with the new and improved urn. Here she is with its top and bottom. 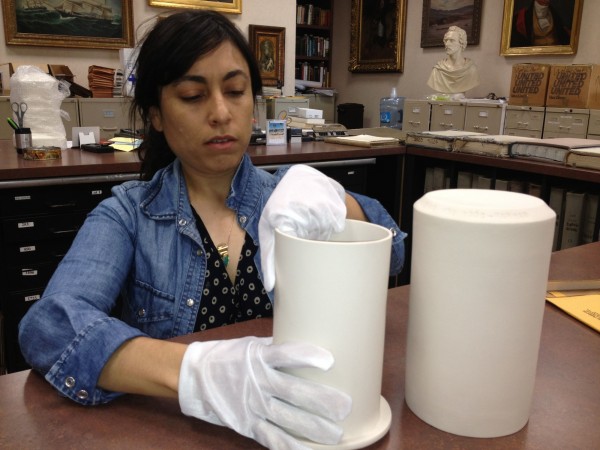 We transferred Eugenia’s ashes to the new urn. Here it is–with a photograph of her–and a small brass plate with her name, life dates, and a description of what she did. As planned, the new and improved urn is “wrapping her in her own voice.” 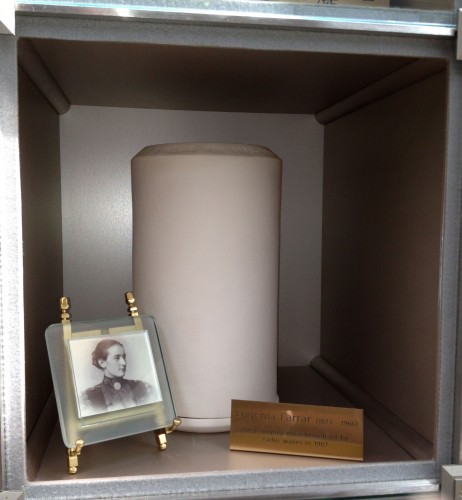 Eugenia, in her new urn.