COVID-19 Update: All entrances open daily, main gates from 7am - 7pm (click for details)
The Voice of An Angel, Transmitted Live by Radio
By Jeff Richman on October 18th, 2010 in Green-Wood Historian Blog 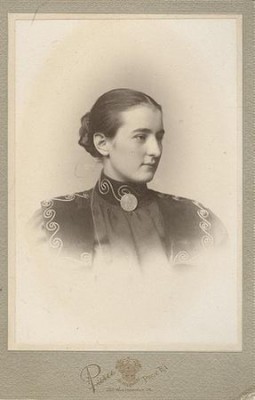 On Wednesday, October 6, Eugenia Farrar’s cremated remains were placed in a niche at Green-Wood Cemetery. It had been a long trip. Eugenia Farrar as a child

Eugenia was born in Sweden in 1873. Here is a photograph of her as a child. As a young woman, she immigrated to the United States. And, in 1907, she became the first person to have their singing voice broadcast by radio. She sang from the Manhattan office of a radio pioneer, Lee DeForest, and her voice, carried by radio waves, was heard by an young naval engineer, Oliver Adams Wycoff. Here he is in a photograph taken that very year. Wycoff heard a voice in his earphones and described it as that of angel.

This photograph, taken in 1957, at a meeting of the Deforest Pioneers, shows, left to right, Clara Wycoff (wife of Oliver), Eugenia Farrar, and Nancy Smith (who was present at the recent ceremony at Green-Wood for the interment of Eugenia’s ashes). When Eugenia died in 1966, her remains were cremated. However, because she had been divorced, and had not had any children, her remains wound up with the Wycoff family. They were then sent to the Brooklyn Navy Yard, where Oliver Wycoff had been when he heard Eugenia’s voice. When Richard Moylan, Green-Wood’s president, learned that they were there, he offered a niche for them at the cemetery. Eugenia, in a custom-designed urn, with the sound of her voice singing “I Love You Truly,” the song she had sung when she made history in 1907, cut into the side of the urn, joins many pioneers at Green-Wood: Samuel F.B. Morse of the telegraph, Elias Howe of the sewing machine, and Walter Hunt of the safety pin.

For an excellent account of Eugenia’s story and her journey, click here for James Barron’s recent story in the New York Times.