COVID-19 Update: All entrances open daily, main gates from 7am - 7pm (click for details)
Commemorating the Battle of Brooklyn
By Jeff Richman on August 27th, 2013 in Green-Wood Historian Blog  |  11 Comments

Sunday, a commemoration of the 237th anniversary of the Battle of Brooklyn, was a great day at Green-Wood Cemetery.

The Battle of Brooklyn was a tremendously important event in American history. Fought on August 27, 1776, it was the first battle of the American Revolution after the Declaration of Independence was issued. It was the largest battle of the entire American Revolution, with approximately 50,000 soldiers, British and American, gathered on or about the field. It was the first time that American troops had fought, toe to toe, in the open field against the greatest military in the world–British armies. And, but for fate (a nor’easter that prevented the British Navy from getting its ships up into the East River and cutting off the Americans only line of retreat), it would have been the end of the American Revolution–with General George Washington and much of his army cornered in Brooklyn Heights, at the west end of Long Island, and captured.

But, for too long, the battle received short shrift from historians, who were uninterested in writing about what was an American defeat. That changed in 1920, thanks to the efforts of Charles Higgins, when Minerva, an heroic bronze saluting her sister, the Statue of Liberty, was unveiled on Battle Hill. Present that day were Assistant Secretary of the Navy and Democratic Vice Presidential candidate Franklin Delano Roosevelt as well as New York State Governor Al Smith.

It was apparent, from the 1830s, when Green-Wood was being planned, that Battle Hill was historic ground and had to be a part of the cemetery. However, little was known about what had happened on that highest point in Brooklyn during the Battle of Brooklyn. In fact, Nehemiah Cleaveland, Green-Wood’s first historian, wrote that little actual fighting had occurred there. Was he wrong! In 2009, Charles H. Lewis’s ground-breaking book, Cut Off: Colonel Jedediah Huntington’s 17th Continental (Conn.) Regiment at the Battle of Long Island, August 27, 1776, was published. In it, Lewis documents the historic importance of Battle Hill. It is indeed hallowed ground. As the Battle of Brooklyn (also referred to as the Battle of Long Island) developed, and American troops faced south to form a line between 18th and 20th Streets near what is now Fifth Avenue, they looked to the east and saw a hill in the distance. Realizing its strategic importance, 300 men were sent, at the double-quick, to seize it. But, as men from Connecticut, Pennsylvania, and Delaware approached the hill, they were fired upon by British soldiers, who had beaten them to that spot. The Americans pressed on and seized the hill, then held it, though severely outnumbered (the British attacking force consisted of 2000 men), against two counter-assaults. When the smoke cleared, the British had suffered 86 killed or wounded. Nowhere else during the Battle of Brooklyn did the British suffer so many casualties.

This year was a very special year for our Battle of Brooklyn commemoration because Charles H. Lewis’s research has now been incorporated into new interpretive signage on Battle Hill. We are very thankful to him for his research. And we are thankful to the Society of the Cincinnati in the State of Connecticut, which paid for the new signage and the new bronze plaque, in tribute to Huntington’s 17th Continental (Connecticut) Regiment, on Battle Hill. 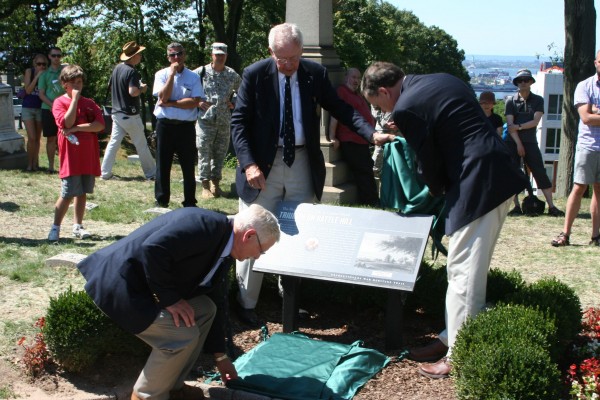 From left to right, author Charles H. Lewis, Jay Jackson, and Brien P. Horan, on behalf of the Society of the Cincinnati in the State of Connecticut, unveiling the new and improved sign and bronze plaque on Battle Hill.

This sign, at the base of Battle Hill, offers context for what happened there in 1776, and a detailed but easily readable map.

This sign tells the newly-discovered story of what happened on Battle Hill on August 27, 1776. 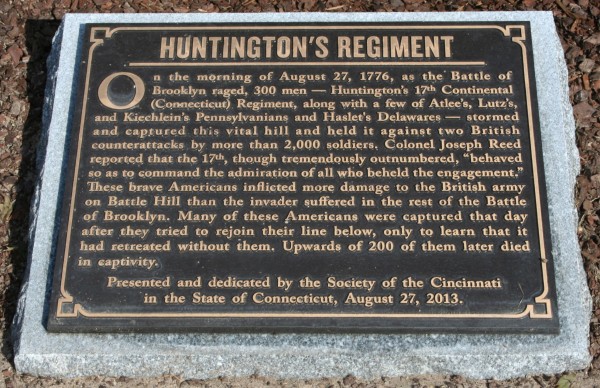 The commemoration began this year with a Battle of Brooklyn trolley tour across Green-Wood’s grounds, led by historian Barnet Schecter and Green-Wood historian Jeff Richman. 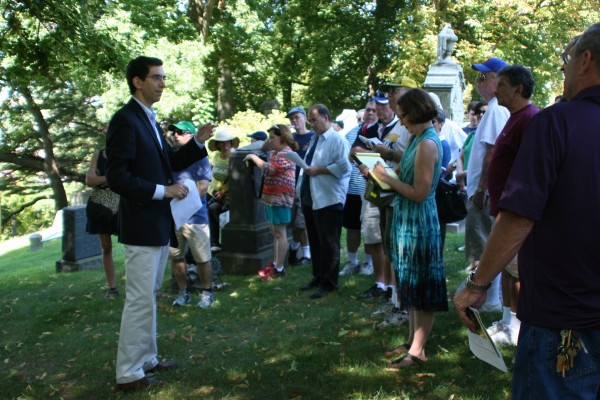 The tour was highlighted by a visit to Ocean Hill, where General George Washington, on the eve of battle, likely surveyed the British troops in the distance. The trolley then drove the attack route along Martense Lane (now Border Avenue) that was used by British General James Grant and his 5000 man army. It continued to Martense Lane Pass, where Grant’s advance was slowed by Delaware troops. After a visit to the Delaware Monument, dedicated in 2001, it was then off to Sylvan Heights, from which American sharpshooters harassed Grant’s march. The tour concluded on Battle Hill.

This year, more than 1000 visitors came to witness an 18th-century cooking demonstration, games, military drills, and a firing demonstration in Green-Wood’s Meadow. Muskets and an artillery piece were fired. 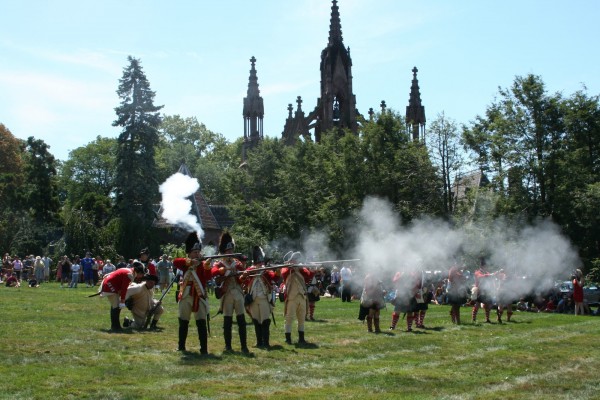 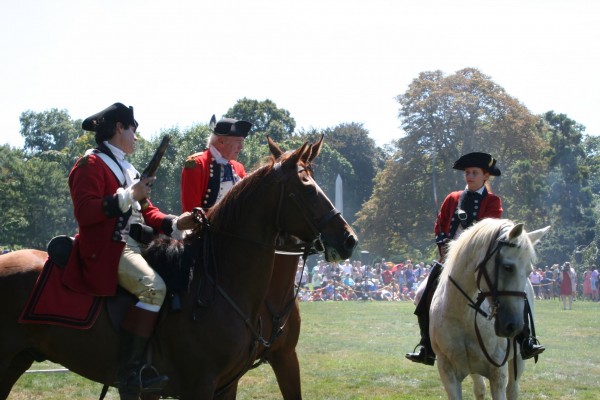 Then it was time for the Battle of Brooklyn Parade from Green-Wood’s Main Gates up to Battle Hill. The Merchant Marine Academy Band led the way, followed by re-enactors in uniform and citizens who took the 80 plus reproduction flags that American and their French allies had carried during the Revolutionary War. 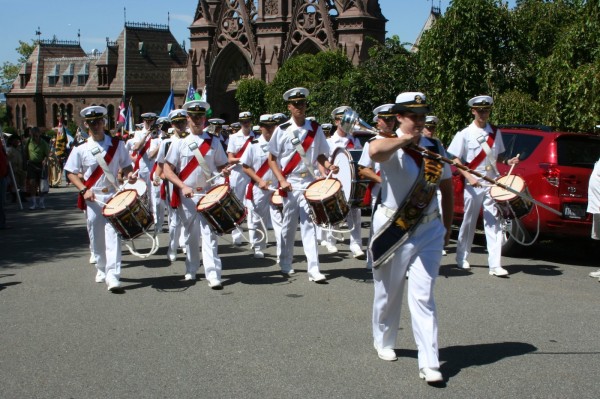 The Regimental Band of the United States Merchant Marine Academy led the parade up to Battle Hill. 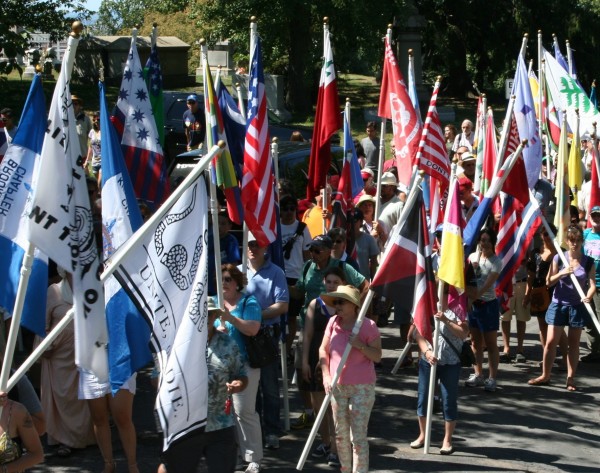 Visitors were invited to take a flag and join the parade; they did so with great enthusiasm.

This year, we also were joined by a blue ribbon Maryland delegation, including Governor Martin O’Malley and Speaker of the State Senate Thomas V. Mike Miller, which came up to join the commemoration. The governor spoke of the sacrifice of the Maryland 400 at what is now the Old Stone House, about one mile north of Green-Wood.  Marylanders Theresa Whittaker and Frank Schwartz sang “The Old Line.” 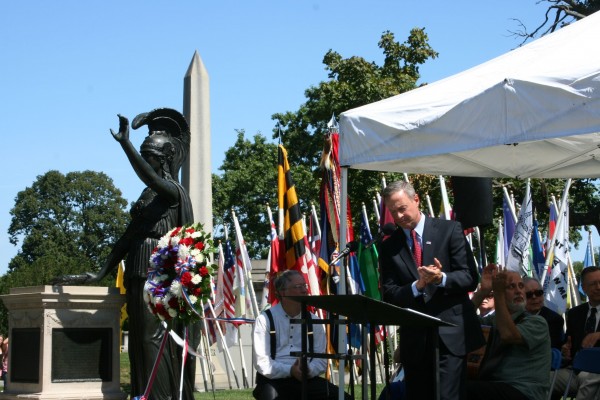 Maryland Governor Martin O'Malley speaking on Battle Hill about the heroism of the Maryland 400. 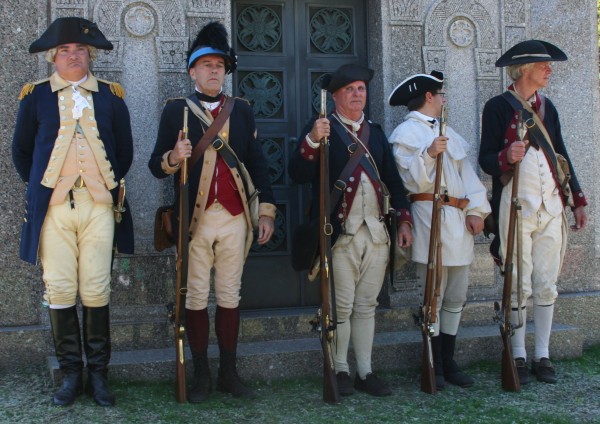 11 thoughts on “Commemorating the Battle of Brooklyn”