Yesterday was the 150th anniversary of the launching of the Monitor, the iron ship that changed naval warfare forever. On January 30, 1862, “The Monitor” was launched from the Continental Iron Works in Greenpoint, Brooklyn.

President Abraham Lincoln personally approved the plans for the Monitor, saying,”All I have to say is what the girl said when she stuck her foot in the stocking: ‘It strikes me there’s something in it.'” It was a race against time–and against the Virginia–a wooden-hulled Union ship known as the Merrimac that had been captured by Confederate forces at the Gosport Navy Yard in Portsmouth, Virginia, then fitted with iron plates, and had been rechristened the CSS Virginia.

As the Monitor was launched into the East River on January 30, many were convinced that no iron ship would stay afloat–and fully expected instantaneous disaster. But, with inventor John Ericcson on its deck for the launch, showing his confidence in his creation, it did indeed stay afloat. In the following weeks, it was outfitted and armed, tested in the East River, then sent south to war on March 6. After encountering a storm, and almost sinking, it made it to Hampton Roads in a nick of time. On March 8, the Virginia had attacked the largest wooden-hulled warships of the Union fleet, sinking two and grounding one. When the little Monitor steamed onto the scene, few thought that it might make any difference. But it moved beside the massive but grounded USS Minnesota to protect her. And, when the Virginia came back out on the morning of March 9 to finish off the Minnesota, imagine its surprise on encountering the “cheesbox on a raft,” the Monitor. For about three hours the Monitor and the Merrimac exchanged shots. When, after absorbing a pounding, the Virginia limped off, the Monitor’s triumph was complete. A new era of naval warfare had dawned. Massive wooden-hulled ships were obsolete; iron ships were ascendant.

So, yesterday, the Greenpoint Monitor Museum (the yet-to-be-realized dream of George Weinman and Janice Lauletta-Weinman) and the Sons of Union Veterans of the Civil War, sponsored a Monitor tour. The tour started at the Monitor Monument (erected in 1938) in Msgr. McGolrick Park, Greenpoint. 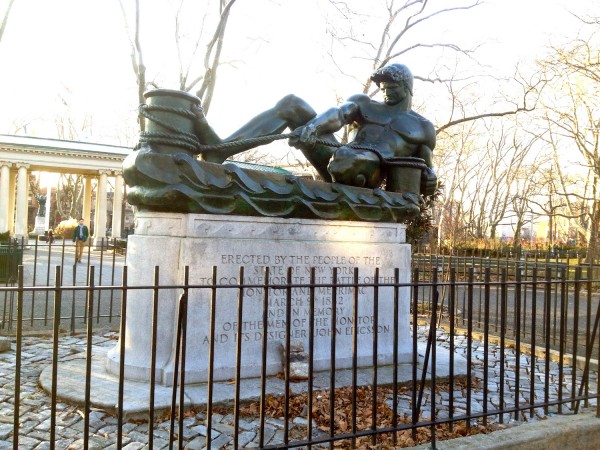 It then continued at the launch spot (and, hopefully, the future location of the Monitor Museum), then on to the great new museum at the Brooklyn Navy Yard, Building 92. 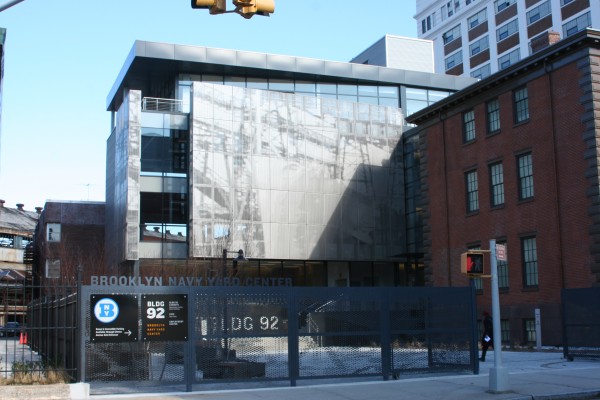 Building 92, the new museum at the Brooklyn Navy Yard. 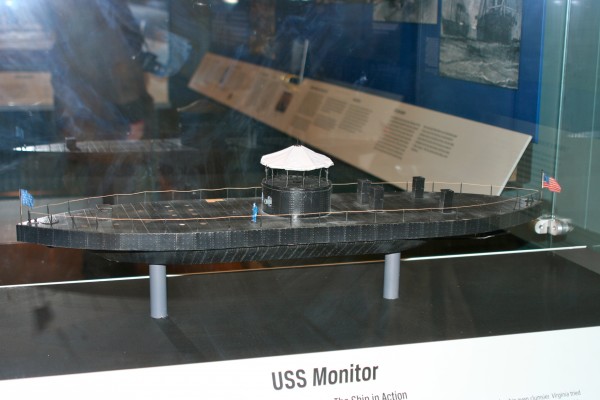 The model of the Monitor in Building 92. 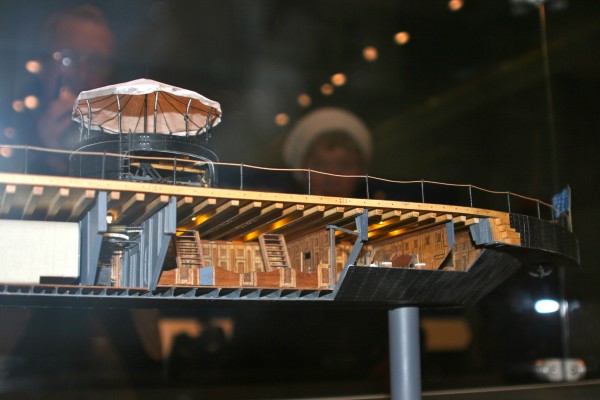 The Monitor model also shows a cutaway of the below-deck officers' quarters.

It was at the Brooklyn Navy Yard that the Monitor was outfitted, armed, and commissioned in the weeks following its launching.

Then, after a stop at Grand Army Plaza, and a good look at the arch 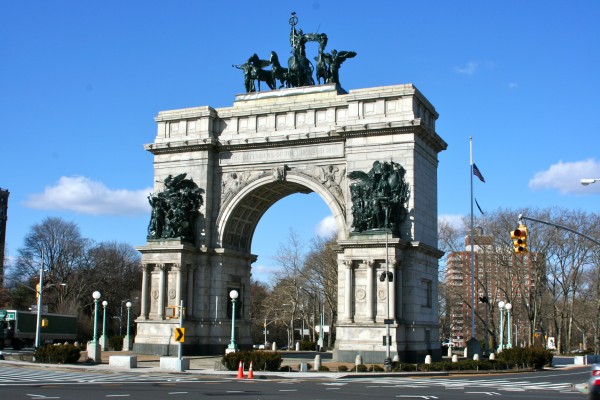 and sculpture there (including the equestrian sculpture of Major General Henry Warner Slocum, who is, of course, interred at Green-Wood), it was off to Green-Wood for a Monitor tour.

We stopped in Green-Wood at the lot of John Roach (1815-1887), who came to America as a penniless Irish immigrant and who benefited from the Monitor’s legacy by becoming the king of the iron-hulled ship industry in America. We then went to the graves of several men who served on the Monitor: Captain’s Clerk Daniel Toffey (1837-1893), 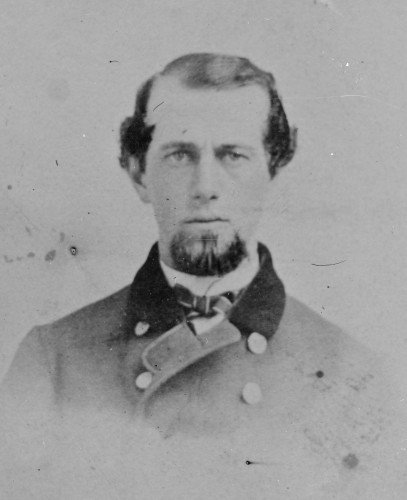 Captain's Clerk Daniel Toffey was the nephew of the commander of the Monitor, Lieutenant John Worden. When the communications system between Worden, who was in the front of the Monitor in the pilot house, and the turret, where the guns were being fired, broke down, Toffey ran between the two, as the battle raged, delivering orders and updates. Courtesy of William Finlayson. 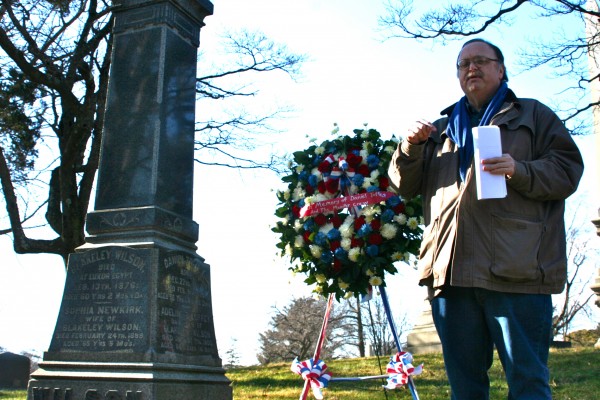 Bill Finlayson, president of the New York City Civil War Roundtable and the great great grandson of Daniel Toffey, paid tribute to his ancestor at graveside. Bill, after talking about Toffey, read excerpts from Toffey's letter home, written just days after the Monitor's battle with the Merrimac, in which he described the action. 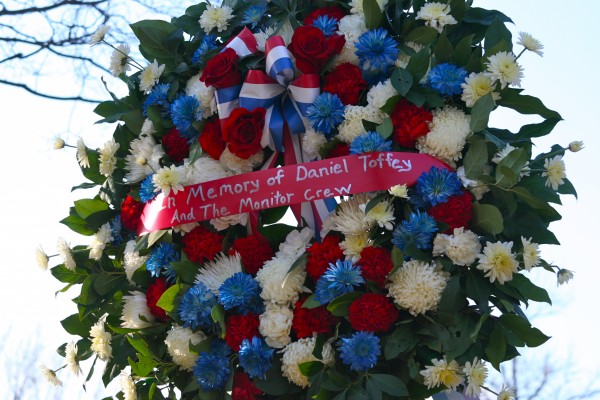 Chief Engineer Isaac Newton (1837-1884), Acting Master Louis Napoleon Stodder (1837-1911), and First Class Fireman Edmund Brown (1813-1892). Brown suffered from “exposure” after the battle, was hospitalized, and was discharged months later because he was “unfit for military service.” 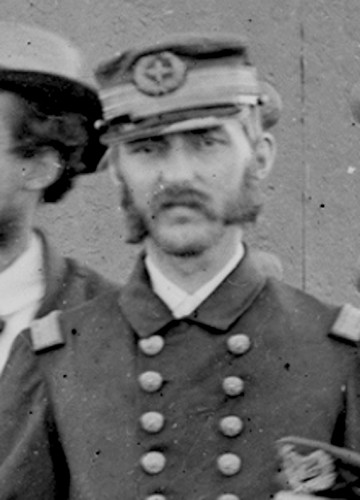 Isaac Newton, Chief Engineer of the Monitor, who performed gallantly on the voyage down to Virginia and then in the battle with the CSS Virginia. Newton, later in the Civil War, served as the superintendent of construction of ironclads in New York City. He also wrote extensively during the Civil War, defending Ericcson's technology. Tragically, Newton fell into ill health in 1884, and committed suicide by slashing his throat.

Louis Napoleon Stodder (1837-1911), acting master of the Monitor, received a concussion, and was unconscious for about an hour, after a Merrimac shell struck the Monitor turret while he was touching the inside of the turret.

Click here for more about Stodder and his two presentation swords, one by Tiffany and the other by Ames, that were given to him by admiring citizens. Those swords were sold a few years ago.

We also visited the graves of two civilians who worked on the Monitor: Brooklyn Navy Yard master machinist Edward Faron and engineer/draftsman Edward L. Crabb. We then paid our respects to Gilbert Elliott (1843-1895), the 19-year-old who built the ironclad CSS Albermarle in a North Carolina cornfield with tools he borrowed from local farmers. And we visited the lot where three Confederates from the Read family are interred, including William Watkins Read ((1844-1910), who, according to his obituary in The New York Times, was on the Virginia during its fateful slugfest with the Monitor.