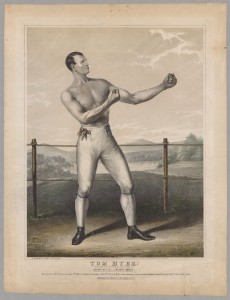 Looks like Hyer was in pretty good shape, assuming the reliability of this image.

In addition to his size, Hyer had the mentality and the heart for fighting. By the time he reached his early 20s, he was a bare-knuckle fighter. His first fight, in September of 1841, lasted 101 rounds and 2 hours and 55 minutes. Wow! That must have been quite exhausting. Hyer beat Country McCloskey that date and claimed the Heavyweight Championship of America. 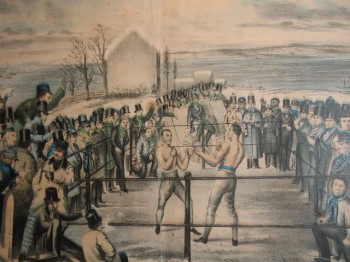 This print of the Tom Hyer/Yankee Sullivan fight was published in the New York Illustrated Times of February 9, 1884

On February 7, 1849, Hyer was scheduled to fight Yankee Sullivan in Rock Point, Maryland. This was something of a return match; Hyer and Yankee Sullivan had fought it out just a year earlier in a New York City barroom. But prize-fighting was illegal at the time, so Hyer, Yankee Sullivan, and several hundred spectators fled ahead of the local authorities to Still Pond Creek, where a ring was quickly erected and, after 17 minutes and 18 seconds, Hyer bested his opponent. Here’s a print of the fight which I recently purchased for The Green-Wood Historic Fund’s Collections.

And this is the account of the end of the fight that appeared in The New York Herald:

“Fifteenth Round – Sullivan was rather slow in getting up at the call of time, and had barely reached the score when he was met by Hyer, who, with tremendous force, let fly both hands in rapid succession, both taking effect on Sullivan’s face. He then rushed in, seized Sullivan, forced him to the ropes, and after a struggle threw him heavily and fell on him, when he again injured him so much that, by the time Hyer was taken away, Sullivan was nearly suffocated; and, on being lifted to his feet, was so weak that he fell back against the ropes. His brother and another person then took him from the ring, claiming foul, and this, put an end to the fight. The referee, however, decided that Hyer had won the fight. 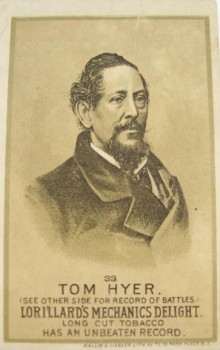 This Lorillard's Mechanics Delight Boxing Card dates from the 1880s.

The fight lasted about sixteen minutes, and was one of the fiercest and most desperate encounters ever witnessed. As soon as Sullivan left the ring, Hyer walked over to one of Sullivan’s seconds and struck him a blow on the head; but a revolver being presented to his head, he desisted from further aggression. The parties, as soon as possible, returned to their respective vessels, got on board, and made for the safest place to avoid arrest, all hands being apprehensive of the event.”

Though Hyer challenged several men who held the title of the Heavyweight Champion of England, he was never able to arrange to fight them. He retired from the ring in 1851 and relinquished his title. Hyer challenged John Morrissey to a fight in 1854, but Morrissey apparently was sloppy with his calendaring and forgot to show up. Hyer had a few barroom fights in the ensuing years, died in 1864, and was interred in his family lot at Green-Wood Cemetery.