On December 23, 2010, I blogged about a painting I had just purchased on behalf of the Green-Wood Historic Fund that memorialized the Civil War career of Major Edward Marrenner.

This painting is now on exhibit in Green-Wood's Historic Chapel, through July 24.

I explained how happy I was to have acquired it and that I had never seen anything like it.

Well, now we know quite a bit more about it. Just last week, Jim Lambert, an Historic Fund volunteer who has been doing a great job cataloguing our books, was working on organizing our old issues of American Heritage Magazine. As he worked with the October 1965 issue, he noticed this image on the back cover: 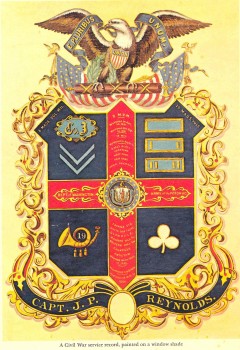 Text elsewhere in the issue described this piece as follows:

A painted escutcheon epitomizes graphically the war record of a Civil War soldier. The painter, J. P. Reynolds, came from Boston, rose to corporal in the 8th Massachusetts Volunteers Militia, and later to captain (two bars) in the 19th. After the war he seems to have earned his living making similar lively mementoes for other surviving warriors.

Doing some research online, I discovered that the Rutherford B. Hayes Presidential Center owns the President Hayes’s escutcheon which was painted by the J.P. Reynolds & Company, and that the Center also now owns the Reynolds Company’s records.

In 1868 John P. Reynolds of Salem, Massachusetts, patented a system of displaying a veteran’s service record as a work of art called an escutcheon. The general design of these escutcheons was a shield with portions designated to the veterans’ ranks, positions, units, and the battles in which they participated. These lithographs and paintings ranged in price from $5 to as much as $125 or more. By 1875 Reynolds had taken on Walter C. Strickler as a partner, a relationship that would end after 1878. Strickler’s role was traveling around the country selling escutcheons. In addition to contacting individual veterans, he also made presentations at local G.A.R. posts and set up a display at the 1876 Centennial Exposition in Philadelphia. In an effort to attract new business, the company displayed the escutcheons of several well-known leaders including Generals U.S. Grant, William T. Sherman, and Philip Sheridan at the Philadelphia exposition. They also solicited written testimonials from other prominent veterans such as Ambrose Burnside, Rutherford B. Hayes, Joshua Chamberlain, and John F. Hartranft.

It is unclear from the incomplete business records how long Reynolds & Co. continued to produce escutcheons, but by 1888, Strickler had formed a competing company (Army and Navy Escutcheon Company) and had been discharged by the board of directors for poor management. The new company was sold to F. H. Dyer of Detroit, Michigan.

And here is John P. Reynolds’s patent application, dated 1868, for “an Army and Naval emblem.” Reynolds noted, “My invention relates to the production of a design for an escutcheon for commemorating the successive stages of army service.”

In The Proceedings of the Massachusetts Historical Society, Volume 14, published in 1901, this was reported:

Mr. Goodell called attention to the new and peculiarly American system of what may properly be deemed heraldic emblems, devised by Captain John P. Reynolds, of Salem. By this system the display on a quartered shield of the stars, shoulder-straps, chevrons, etc., indicative of rank, and of the bugle, crossed cannon, and sabres, indicating infantry, artillery, and cavalry, together with the army badges denoting the several army corps, divisions, brigades, and regiments, all blazoned with the coats-of-arms of the Republic and of the respective States of the Union, — and, in a parallel series, of similar badges appropriate to the navy, — 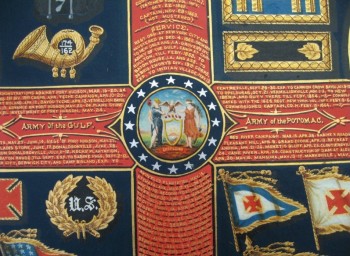 Detail of the Marrenner escutcheon, showing some of the symbols that Reynolds often included.

he is able to produce for every officer and private in the military and naval service of the Union a perfect record by intelligible symbols; which, together with the date of enlistment and mustering out, and of every battle in which the subject was engaged, and of his death if that occurred while he was in the service, furnishes a full and exact account of his military career readable at a glance, and not only valuable for present reference, but, as it is easy to foresee, of inestimable service to the future biographer and historian, as well as a source of pride to the descendants of the hero whose fame it perpetuates.

Mr. Goodell has obtained from Captain Reynolds a cut of the captain’s own military record displayed according to the system above described. This Mr. Goodell offers as worthy of being preserved in our printed Proceedings, inasmuch as many thousands of these symbolic shields are scattered throughout the country, and, sooner or later, must become a subject of considerably greater interest than they are at present.

With respect to our Marrenner escutcheon, I had surmised that “[i]t appears to date from the late 1880s; the brackets holding what appears to be the original frame together are dated 1886.  That seems to fit well within the J.P. Reynolds’s company history.

It is, of course, always good to learn more about what you own. And that is even more the case when, like the Green-Wood Historic Fund, its collections are held in order to help educate the public. 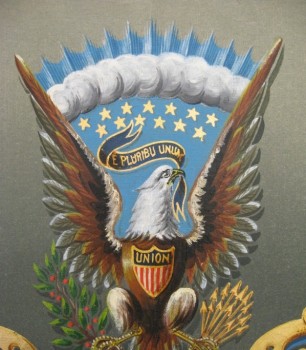 The great eagle, by J.P. Reynolds, that sits atop the Marrrenner escutcheon.