COVID-19 Update: All entrances open daily, main gates from 7am - 7pm (click for details)
Coincidence? Or Something More?
By Jeff Richman on August 11th, 2011 in Green-Wood Historian Blog, Uncategorized  |  3 Comments

We have a new Historic Fund volunteer–Patty. She was interested in doing something, and, it turned out, she is quite the genealogical researcher. Once I learned that, I suggested that she might do follow-up research on the biographies of some of our Civil War veterans, looking for census entries, obituaries, and more, to improve their biographies. She was game, so I sent her research tips from Sue Ramsay, who has been doing great work on these biographies. And, because our biographical dictionary is broken up into eight parts (it is too big to e-mail as a single document), I gave Patty the end of the alphabet to work on: V-Z.

Well, it turns out, Patty is quite the researcher. As she began work on the Vs, one of the very first biographies she came upon was that of Max Van Bosch (1836-1889), a first lieutenant in the 15th New York Heavy Artillery. Patty really hit pay dirt in her research–she sent me 4 different e-mails, each with attachments, with documents she had found that told his story.

But here’s where it gets strange. I had been in touch with Dennis, a great Civil War buff in New Jersey, just a few weeks earlier. Dennis is a Civil War collector and a battlefield expert. He had just gotten back from the 150th anniversary ceremonies of the Battle of Bull Run on July 21. It turns out that Dennis’s wife is related by marriage to the two Joachims–Conrad (1815-1862) and Charles (1843-1863)–who are interred side-by-side in the Civil War Soldiers’ Lot at Green-Wood. Conrad was a doctor and assistant surgeon; his son a second lieutenant–who both served with the 15th New York Heavy Artillery and both died during the Civil War.

I knew the Joachims story. In fact, Glenn Collins had interviewed me and had written it up in The New York Times on Memorial Day, 2007. You can find it here. And, as a result of his article, a delegation of Joachims, after reading that story, had come to pay their respects to their ancestors. Here’s a photograph of their visit they. 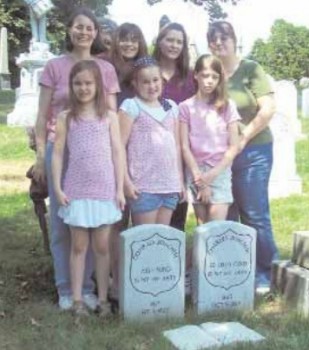 The Joachims, in 2007, at Green-Wood, paying their respects to their ancestors who died during the Civil War. That's Lori Joachim at left in the back row; I have put her in touch with Dennis and his family, and they already have compared notes about their Joachim research.

We reported on their visit in the Fall 2007 issue of The Arch. Here is that report.

Just off the Soldiers’ Lot, in the same row as her husband and son, is the gravestone for Eliza, “Widow of Dr. Joachim.” Dennis, at the very same time that Patty had sent me all of that information she had dug up about Max Van Bosch, had apparently been doing some digging of his own. He had gone out to Eliza’s gravestone, and, with a sharp eye, noticed that there appeared to be an inscription at the bottom of the gravestone, where the soil started. So Dennis did some gentle digging, and, lo and behold, uncovered an inscription to none other than–yes, it’s true– Max Van Bosch! It turns out that Dennis and Patty both independently had discovered that Max Van Bosch had married a Joachim.

The gravestone for the Widow Joachim. Note the inscription for Max Van Bosch--it was covered with soil until Dennis dug it out.

Now, I admit that probability theory, which I studied for a few weeks in high school so many years ago, is quite a distant memory. Therefore, if I get this wrong, please excuse me. But, here goes. If we have 4,600 biographies (which we do), the probability of Patty working on any one of those biographies is 1 in 4,600. And, the likelihood of Dennis working on any of the veterans is likewise 1 in 4,600. Now here’s where it gets good. The likelihood of both of them, by chance, working on the same individual at the same time is one in just over 21 million! Those are some pretty long odds!!

Finally, here’s the new and improved biography of Max Van Bosch, including Patty’s research and the writing of Susan Rudin (our Civil War Projects great editor). It really demonstrates the tremendous work that our volunteers are doing researching and writing these biographies:

VAN BOSCH (or VAN BOOSH, VAN BOSH), MAX (or MARCUS) (1836-1889). First lieutenant, 15th New York Heavy Artillery, Companies A and C. Born in Germany, Van Bosch enlisted at New York City as a sergeant on August 23, 1861, and mustered into Company A of the 15th Heavy Artillery, 3rd Battalion, on September 23. On January 2, 1862, he was promoted to second lieutenant and was transferred into Company C that day. After his promotion to first lieutenant on September 2, 1863, he returned to Company A. His pension record and the muster roll indicate that he served as a quartermaster in the Field and Staff of the 15th Heavy Artillery. During part of his time as quartermaster from December 15, 1861, through January 1, 1863, he was accused of improprieties. He was investigated by Levi C. Turner and Lafayette C. Baker beginning in May 1863 for selling clothing and other contraband to officers of the regiment in July- August 1862 at Fort Ethan Allen. It was rumored that he accepted a gold watch and $50 as a bribe for allowing merchandise to pass the guard without examination. Van Bosch stated that he took a felt hat, appropriated pepper and leather to the men for resoling their shoes and returned the liquor that came in the shipment under question. He mustered out on August 22, 1865, at Washington, D.C. Van Bosch became a naturalized citizen on October 27, 1865. His name, listed as Max Van Bosh, appears on a list of Jewish veterans of the Civil War. According to the census of 1880, he was employed as a merchant; the Brooklyn Directory of 1888-1890 lists him as an agent. In addition, he was a Mason. His last residence was on 233 Hooper Street in Brooklyn. In 1890, his wife, Louise Van Bosch, who is interred with him, applied for a widow’s pension, certificate 335,434. Section 115, lot 11193, grave 214.

UPDATE: Dennis sent me this photograph of his wife, Nancy (at right) and her sister, Kathryn, both Joachim descendants, at the graves of Conrad and Charles Joachim. 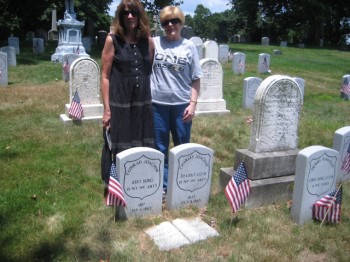 Nancy (Dennis's wife) and her sister Kathryn are both Joachim descendants. They were photographed at the graves of Conrad and Charles Joachim.

3 thoughts on “Coincidence? Or Something More?”