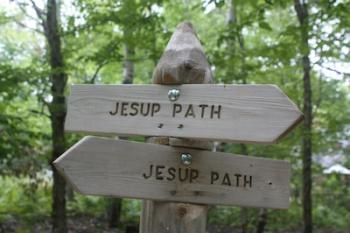 I just got back last week from my favorite place in the world: Acadia National Park up in Maine. For me, Acadia is an incomparable mix of climbable mountains, rocky coast, quiet carriage trails, scenic ponds, and lobster dinners. 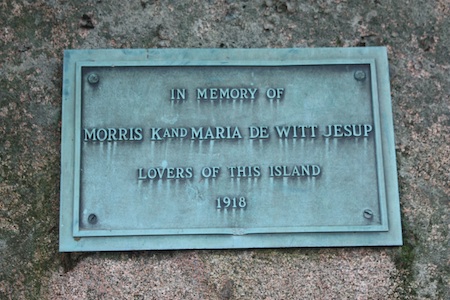 Well, there I was, enjoying a ranger-led walk in the woods, when we came across a bronze plaque on a large granite boulder. And that name on the plaque, Morris Jesup, rang a bell-perhaps this was a B.A.G. (as in Buried-At-Green-Wood). So, just to be safe, I took a photograph. And, when I later got back to my laptop, I checked my biographical dictionary of the famous buried at Green-Wood. There he was: Morris K. Jesup.

According to his biography, Jesup lived from 1830 until 1908. He went to work at the age of twelve, then prospered in banking and became one of the leading financiers of his day. In 1884 he retired with a large fortune from business to devote himself to philanthropy. He was a founder of the American Museum of Natural History in 1868, was a trustee there for many years, and became its president in 1881. During his lifetime he gave it $1,000,000, and a like amount was left to it in his will. He financed scientific expeditions, including the Jesup North Pacific Expedition to study migrations between Asia and North America. He was president of the Peary Arctic Club, and worked in that capacity to make the discovery of the North Pole possible. Active in the forest preservation in New York State which resulted in the Adirondack Preserve, he was also president of the Audubon Society 1897-1908. Jesup also gave large sums to the Union Theological Seminary in New York, Hampton and Tuskegee, Harvard, Yale, Williams, and Princeton. He was treasurer of the John F. Slater Fund for the Education of Freedmen 1883-1908 and supported Anthony Comstock in his campaign against “indecency.” He was vice president of the Chamber of Commerce of the State of New York 1889-98, and its president 1899-1907. A founder of the Young Men’s Christian Association in New York City, he was its president for many years. He was also president of the New York City Mission and Tract Society and the Five Points House of Industry.

Of course, what struck me immediately, beyond all of his good works with his fortune, and all the presidencies he held, was that he had been involved in preserving the land that would become Adirondack State Park. That seemed to be very much the man who had loved the woods of Acadia. Here’s a great image of Jesup. 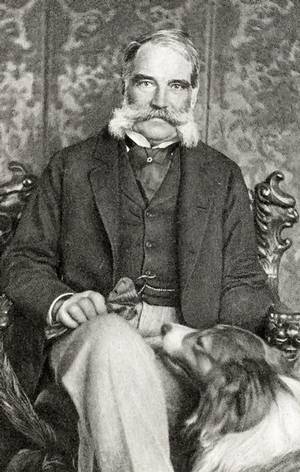 Acadia, according to the park ranger, has recently started renaming trails there with the names they had in its earliest days as a National Park. One of those trails was named for Morris K. Jesup and Maria De Witt Jesup. They, like many others on Mount Desert Island, contributed land and money to the creation of the first national park east of the Mississippi River. We owe them and all the others a hearty thanks.

And, this certainly supports my theory that associations with Green-Wood’s permanent residents are everywhere, even in the woods of Maine. You just have to have a few names rattling around in your head at the right moment.

1 thought on “A Walk in the (National) Park”