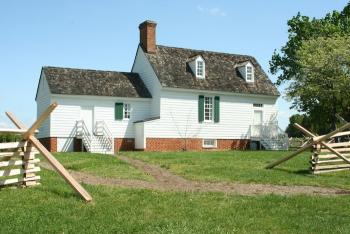 Just two weeks ago, I received an e-mail from Don Morfe. Don is a very active and dedicated volunteer with the Congressional Medal of Honor Society. He spends a lot of time researching and going out to cemeteries, locating the final resting places throughout America of those who have been given the Medal of Honor and making sure that their graves are marked appropriately. I met Don at Green-Wood during one of his field trips a few years ago, when Don was making sure that we got bronze plaques for 10 of our Medal of Honor winners; those plaques should be installed shortly.

Well, back to Don’s recent e-mail. He informed me that Laura S. Jowdy of the Congressional Medal of Honor Society had been doing research on a Frank Miller. Miller enlisted at Brooklyn on September 22, 1864, at the age of 19. He was awarded the Medal of Honor for his heroism at Sailor’s Creek, Virginia, on April 6, 1865, when, in the final days of the Civil War, he captured the flag of the 25th Battalion, Virginia Infantry, retained it despite his capture, and was himself released by Union forces still possessing that captured flag. In all, 57 Medals of Honor were awarded for actions that day, 47 of which were for capturing Confederate flags as Robert E. Lee’s Army of Northern Virginia desperately sought to get away from Union forces closing in on them. Lee would surrender his army 3 days later at Appomattox Court House, for all practical purposes ending the Civil War.

It was believed that Miller, who died in San Francisco, California, was interred in that city. Indeed, the Historical Data Systems, a great online database for information about Civil War soldiers, states that he is buried in San Francisco. But Laura, in her research on Miller, discovered several interesting items in a local newspaper, the San Francisco Call. On September 13, 1903, it was reported, under a headline of “Victims of Alcohol:” “Frank Miller, a clerk, 55 years of age, was found dead yesterday on the floor of the bathroom at 212 1/2 Sixth Street. He had been on a spree since the G.A.R. celebration. Death was due to natural causes.” In the next few days, short items in the San Francisco Call reported that Miller had died on September 12, that he was a native of New York, that his funeral would be held on September 17, and interment would be at the I.O.O.F. (International Order of Odd Fellows) Cemetery. Laura contacted the San Francisco Columbarium (also known as the I.O.O.F Columbarium) and learned that Miller had been cremated there, that he was in their burial records, but no location for his remains was recorded. She also came across an item in the Call’s September 17 edition: Miller’s “remains will be shipped to New York this morning for interment in Green-wood Cemetery.” Don checked with our office and was told that a Frank Miller had been interred in Lot 1947 on September 21, 1903. Could that Frank Miller be the Medal of Honor winner? Well, at Don’s request, I checked our records and, lo and behold, the Frank Miller who was interred at Green-Wood died in San Francisco on September 12. A match!

On Wednesday, April 14, I e-mailed Don to tell him we had a match. Four days later, just by coincidence, I was on the Sailor’s Creek battlefield on a tour. But I didn’t know, as I walked that battlefield, that the Frank Miller whom we had just identified as the Medal of Honor winner interred at Green-Wood, had won his Medal of Honor on those very hills at Sailor’s Creek. Above is a photograph of the Hillsman House, on the Sailor’s Creek battlefield; it was used as a field hospital during the battle, and dried blood still stains its floor boards.

Finally, here’s another strange twist. On the trip to Virginia, I bought only one book: William Marvel’s Lee’s Last Retreat: The Fight to Appomattox. In it, Marvel actually mentions Miller in a footnote! But he concludes that Miller, and many of the other men from General George Armstrong Custer’s cavalry division who were awarded the Medal of Honor for their capture of Confederate flags that day, were “nowhere within the range of [the] combat operations [of those Confederate units],” and concludes that Miller and another cavalryman who also was awarded a Medal of Honor “obviously barged in after the fighting was over and snatched [the flags] from their dazed owners.”

In any event, Miller received the Medal of Honor, and his grave soon will be adorned with a bronze plaque, courtesy of the Veterans Administration, stating that fact.