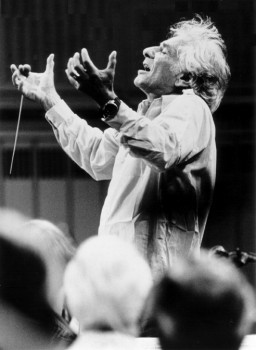 Born in Massachusetts to Jewish immigrants from Russia, Leonard Bernstein resisted his father’s efforts to steer him into the family’s beauty-supply business, instead choosing a music career. After studying music and graduating from Harvard, he spent the summers of 1940 and 1941 working at Tanglewood with Serge Koussevitzky, who became his mentor. Bernstein was appointed the New York Philharmonic’s assistant conductor in 1943, and became an overnight sensation on November 14 of that year when he stepped in for the ailing Bruno Walter to conduct.

For nearly fifty years, Leonard Bernstein was one of the leading figures in the music world. His First Symphony (Jeremiah) was voted the best new American orchestral work by the New York Music Critics’ Circle for 1943-44. His musical On the Town (1944) ran for over a year on Broadway. In 1957, he collaborated with Stephen Sondheim on his masterpiece, West Side Story. That same year he was named co-conductor of the New York Philharmonic, and the next year he was named its music director and chief conductor, position he held until 1969.

Bernstein was for many years one of the most sought-after guest conductors in the world, and served as conductor laureate of the New York and Israel Philharmonics. At the same time that he was winning new respect for American music, he also became the most influential music teacher in history through his Young People’s Concerts, which were televised to millions in the 1960’s, was a gifted pianist, and was a theatrical conductor.

Green-Wood Cemetery was founded as a nonsectarian Christian cemetery. However, over the years a few Jews have been buried there. Certainly the most prominent of those is Leonard Bernstein. It is not surprising that Bernstein would choose Green-Wood, rather than a predominantly Jewish cemetery, as his final resting place. Bernstein was long interested in diverse religions. He maintained a lifelong involvement with Judaism, writing several works of music, including Kaddish, which were derived from the Old Testament. But he also had a great interest in Catholicism, and wrote Mass for the opening of the Kennedy Center in Washington, D.C., in 1971. The services at his burial were from the Jewish religion.