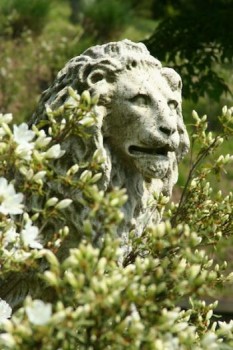 Several weeks ago, Klaus-Peter Siegloch, correspondent and New York bureau chief for ZDF German Television, came to Green-Wood for a visit. And was he impressed! I showed him around for several hours, said a few things on camera, his cameraman shot some great video across the grounds, and the results are now in. Here’s their 15 minute piece of the top attractions for tourists in NYC–and the leadoff attraction is Green-Wood Cemetery. Not bad, huh? The Green-Wood segment is the first 3 minutes.

I am told by a German linguist of my acquaintance that the script includes this: He calls Green-Wood the most beautiful cemetery in New York City, and only half an hour from New York. “It’s a gigantic park, in which one can rejuvenate oneself, and, at the same time, study the cultural history of the gravesites.” He also notes that Steinway (the piano maker, who built the largest tomb at Green-Wood, with room for 256 bodies, 128 on the main floor and 128 in the basement) is of German origin. Maybe we’ll need a German-speaking tour guide soon.