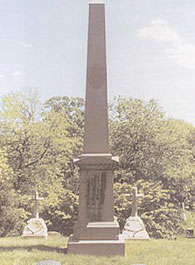 Henry J. Raymond was the founder and first editor of The New York Times. He launched his newspaper in 1851, publishing editorials expressing strong sentiments “emphasizing reason over passion and impartiality over partisanship.” He was politically active, becoming the Speaker of the New York State Assembly and Lieutenant Governor. He helped the Republican Party, “The Party of Lincoln.” During the “high tide” of the Confederacy, when it appeared the South could win the War of the Rebellion, Raymond fought to rally public opinion in favor of the Union. When draft rioting mobs approached the offices of The New York Times in July 1863, Henry Raymond held them off with three Gatling guns he had obtained from the army. It took regiments of Union soldiers to finally restore order in the City.

Raymond was to write a biography of his friend Abraham Lincoln before his own death at the age of only forty-nine.

The Raymond Family Memorial consists of an obelisk surmounting a four-part pedestal, all constructed of dark gray, coarse-tooled granite, which is in very sound condition. The monument stands approximately sixteen feet in height. A raised polished granite shield on the front face of the obelisk is incised with the family name: RAYMOND. Three sides of the die bear incised inscriptions for Henry J. and his wife Juliette on the face, and other Raymond family members on each of the side faces.

Five headstones stand in front of the monument, each bearing incised initials of those interred, “V” cut on polished top surfaces.

The family memorial and headstones require overall stone cleaning to remove general soiling, and specifically to lift off unusually dense accretions on surfaces of the inscribed pedestal die which obscure the legibility of names and dates. Existing lead jointing between granite components appears to be in good condition and need not be disturbed.

Consideration shall be given to enhancing the legibility of the inscriptions.