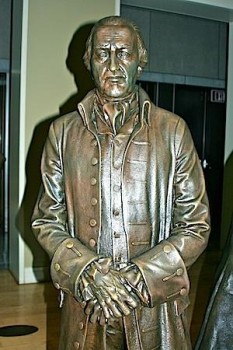 Two hundred and twenty-three years ago today, 39 men put their signatures on an historic document, the United States Constitution. One of those men was William Livingston (1723-1790) of New Jersey, pictured above. Livingston also served in the Continental Congress, as brigadier general of the New Jersey militia, and as the first governor of New Jersey, serving in that last position from 1776 until his death in 1790.

Livingston is interred at Green-Wood Cemetery. However, it was a rather long post mortem trip to Green-Wood for him. Within days of his death, he was interred at the Presbyterian Church Burial Ground in Elizabethtown (now Elizabeth), New Jersey. A year later, his remains were removed to the Wall Street Church Burial Ground in Manhattan. Finally, in 1844, his remains and those of ten other members of his family were moved to Green-Wood.

The above bronze sculpture stands in the National Constitution Center in Philadelphia.