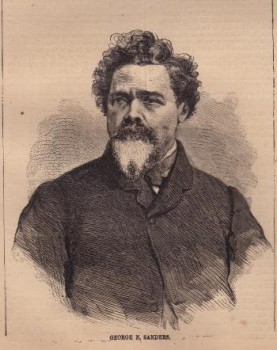 I have long-known the story of Samuel Chester Reid (1783-1861). Reid was a naval officer and hero of the War of 1812–commanding the privateer General Armstrong off the Azores, he took on a British fleet, delaying its arrival in Louisiana, and enabling General Andrew Jackson to triumph over the British at the Battle of New Orleans. Reid was also revered for his contribution to the design of the American flag–it was Reid who came up with the idea, approved by Congress in 1818, to add a star to the American flag as a new state was admitted, but to leave the original 13 stripes unchanged. For many years, Reid was in an unmarked grave at Green-Wood Cemetery. But his grave finally was marked in the 1950’s with a granite monument that describes his accomplishments and a flagstaff from which flies an American flag. It did not occur to me that there might be other fascinating individuals in this same Green-Wood Cemetery lot. But, in preparation for a tour I was doing of Confederates at Green-Wood, I went out to find the gravesite of Reid Sanders (1837-1864).

Sanders, I knew, had been a major in the Confederate Army when he was captured by Union forces and imprisoned at Fort Warren in Boston Harbor. I knew of a haunting photograph of him and other Confederate prisoners, taken there, just months before he died. But, it came as quite a surprise when, in looking for Sanders grave, I discovered that it was in the lot with Samuel Chester Reid. It did occur to me that “Reid” was the common denominator–perhaps they had been related. Further research yielded the answer. Sanders, a native of Kentucky who was a resident of Virginia when he enlisted in the Confederate Army, was taken prisoner when the C.S.S. Atlanta was captured by Union forces in Warsaw Sound, Georgia, on June 17, 1863. He then was imprisoned at Fort Warren in Boston Harbor. In August 1864, his mother, Anna Reid, wrote to the Confederate President, Jefferson Davis imploring him to work out an exchange of a Union officer to secure her son’s freedom, but she was notified by C. S. A. Secretary of War James Seddon that an exchange was not possible. Davis subsequently saw to it that his mother received Reid’s pay. Reid Sanders, still a prisoner, died from dysentery on September 3, 1864.

Sadly, it was not until months later that his mother learned of his death. It occurred to me that Reid’s mother might have been just a loving mother, with no connections, concerned about her son. But perhaps the facts, that she had written to the president of the Confederacy, had gotten a reply from the Secretary of War, and that the highest of Confederate officials had made arrangements for her son’s pay to be sent to her while he was imprisoned, might indicate that she was somehow very well connected. What might that connection be? Well, it turns out that there is one more very interesting fellow in that lot: George Nicholas Sanders (1812-1873). He met and married Anna Reid of New York in 1836. So, he was Anna’s husband and Reid’s father. And he was a leading Confederate agent during the Civil War–a man of sufficient prominence that his wife could write to the Confederate president and expect results. At the onset of the Civil War, George Sanders was involved in several failed schemes to increase the size of the Confederate Navy. In 1863, Sanders went to Montreal, Canada, and there led secret activities in support of the Confederacy, including a meeting with John Wilkes Booth. Sanders was involved in the Confederate raid across the border on St. Albans, Vermont, on October 19, 1864, when three of the town’s banks were robbed, one citizen was killed and another wounded, and a failed effort was made to burn the town, before the raiders fled to back to Canada. Sanders looked at St. Albans as the starting point for delivering terror to the North and forcing Union troops to be brought back from the front to protect the homeland: “There will be war to the knife and to the hilt. They will be made to think 20,000 men wait in Canada, across the border, eager and prepared. The towns will burn and be pillaged.” Though Sanders denied any involvement in the St. Albans raid, he supported the raiders who were being held by Canadian authorities and helped assemble their legal defense team.

Ultimately, the raiders were freed on April 10, 1865, and the money they had stolen was given back to the banks. Soon after the assassination of President Lincoln, Sanders became a suspect in the conspiracy and a bounty of $25,000 was put on his head. An article in the August 26, 1865 issue of The New York Times reiterated his alleged connection to Lincoln’s murder. Sanders remained in Canada after the assasination and worked hard to deflect blame from the Confederacy in the attack. Sanders left for Paris in November 1865 and returned to New York in 1872 where he lived at 321 East 17th Street in Manhattan. He is buried in an unmarked grave in the Reid family plot with his wife Anna and son Reid. 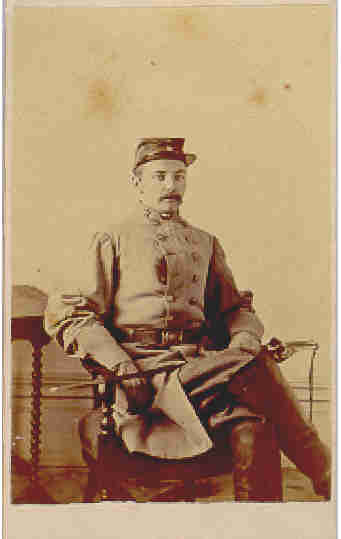 This is Reid Sanders, son of George and Anna Sanders, who died while imprisoned at Fort Warren in Boston Harbor during the Civil War.