I recently got another e-mail from Bob McAvoy. I’ve never met Bob, but I’ve certainly gotten a lot of e-mails from him. Bob’s passion is Civil War veterans from New Jersey. Sometimes I think that 7 years is a long time for me to have spent so far searching for Civil War soldiers. But then I remember Bob, who has been going at it for much longer–20 years and counting. Bob sends me his Green-Wood discoveries–men who, during the course of his research on New Jersey men, he has determined are interred at Green-Wood. Recently he sent me a 1914 New York Times obituary for a Richard C. Macmurdo, a resident of Arlington, New Jersey when he died, who, is was reported, “served in the Confederate Army as a Captain of Artillery.”

Well, always particularly excited about discovering the story of another Confederate at Green-Wood (just a few weeks ago I did a trolley tour of them–we are up to 62 Confederates now!), I headed for the Internet. A good name to research–can’t be too many Richard C. Macmurdoes around. Found him at Ancestry.com, in City Directories: a real estate agent in New York City in 1898, living in Arlington. Found him on Historical Data Systems, a wonderful subscription database–went in as a private, made it all the way to captain, wounded at the Battle of Chancellorsville (Stonewall Jackson, anyone?) in the left hand, etc. 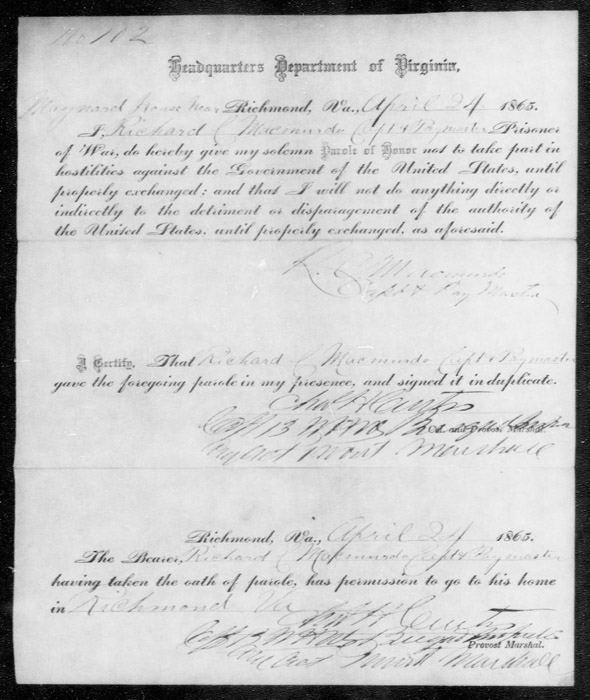 Now hit real paydirt on Footnote.com–over 100 pages of his service records. A two-page letter he wrote on December 13, 1861, early in the Civil War, to Major General Leonidis Polk (“The Fighting Bishop”), apparently a friend of the family, explaining that he was a private who was seek promotion to officer. A report from the Confederate States of America Treasury Department of payment of $250 to Macmurdo for his horse (Confederate officers typically supplied their own mounts) that was killed at the Battle of Fredericksburg. But, it took a year to for Macmurdo to collect this payment, and only after he hired a lawyer to pursue his claim! More documents told the story of how, in August, 1863, Macmurdo was given command of the Confederate Ambulance Shops in Richmond, Virginia. His office was on the docks along the James River, just opposite the notorious Libby Prison, where many Union officers suffered and died. Macmurdo reported that in 1864 his men built 264 ambulances. However, they lost almost a month of work time because the dock was flooded by the cresting river. Finally, on April 24, 1865, Captain Richard C. Macmurdo signed a “Parole of Honor” “not to take part in hostilities against the Government of the United States.” The War of the Rebellion was over for Captain Macmurdo. Here’s the oath of allegiance to the United States of America thathe signed at the end of the Civil War.