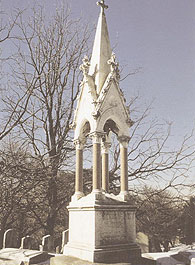 Saved in Time Estimate: $ 125,000.
For marble cleaning and repointing, conservation and consolidation; replication and recarving of missing and eroded details; restoration of several markers within the plot (details below).

The Brown Family Plot is an impressive commemoration including the beautiful original memorial of the maritime tragedy which took the lives of family members GRACE, HERBERT, WILLIAM B., CLARA, GRACE ALICE JANE, AND MARIA MILLER. Over seventy other grave markers for family members and friends completely cover the crest of the landscape site.

The “ARCTIC” sinking in 1854 was not only tragic, but a truly scandalous event resulting in the deaths of some 250 persons. Following collision with the “VESTA” and five hours trying to save the ship, the crew of the “ARCTIC” took priority in saving themselves. This dereliction of duty resulted in only 24 of 182 passengers being saved, none of them women or children, while 61 of the crew of 153 survived. The Browns’ lost a son, two daughters, a daughter-inlaw, and two grandchildren.

James Brown, the family patriarch, who happened to be a principal financier of the Collins Line, which operated the “ARCTIC,” was “crushed and shattered” by the terrible news, according to New York diarist George Templeton Strong. Mr. Brown set up the New York branch of Brown Brothers & Company in 1825. The firm is still in business as Brown Brothers Harriman & Co., the nation’s oldest and largest private bank.

The disaster triggered significant maritime reform, resulting in improved design of ocean-going ships by requiring watertight compartments, and establishment of transoceanic mapped sea-lanes to prevent collisions between ships in the future.

The Brown Family Memorial is a magnificent example of Victorian design. It was created by English-born sculptor John M. Moffitt, who also sculpted the four tympanum and four shield bas reliefs on the Main Entrance Gates of Green-Wood. The monument consists of a pedestal supporting a Gothic style canopy covering a three-dimensional carved marble depiction of the sinking paddle steamer “ARCTIC.” Granite stepping blocks are provided on all four sides of the monument plinth so that visitors may be able to see the ship.

The structure, which is approximately 25 feet in height, includes a granite plinth and stepping stones, a marble base, inscribed die and capstone with sculpture of “ARCTIC,” four polished red granite column shafts supporting a highly ornamented and lettered, gabled canopy having carved capitals, crockets and finials in the form of delicate flower motifs. Surmounting the canopy is a smooth spire with a Latin cross. Within the dome of the canopy are four winged angels. While Gothic in form and derivation, the all-white marble sculptural carving is highly naturalistic and shows the hand of a creative artist rather than an ornamental carver. John Moffitt’s name is inscribed on the marble base.

Erected over 140 years ago, the Brown Family Memorial has suffered from the effects of an acidic environment, that slowly dissolves the surface and features of the marble elements. Despite the surface erosion and texturing, the monument is structurally sound, is mostly legible, and has lost only one of its lovely floral bouquet finials. The angels on the interior of the canopy are crumbling due to the intensified marble deterioration, which occurs in moist shaded areas. The marble here has lost its integrity, allowing heavy blackened crusts of gypsum to form, resulting in spalling that is taking away the fine sculptural detail. Biological growths and deposits also soil areas of the marble.

The raised, carved marble lettering that exists on the front face of the die and on all four gable facades of the canopy is differentially weathered and is most severely deteriorated on the north facing gable. These Biblical quotations are important to the sentiment of the memorial and should be preserved.

The surrounding gravestones in the Family Plot, most of which are also white marble (some with granite bases), have aged and become eroded and soiled in the same way as the principal monument. Several stones featuring cut-out crosses have broken, with pieces remaining on site, and other stones are out of level.

The Family Plot is approached from Hillock Avenue by a set of nine light gray granite steps and platforms, flanked by newels and stringers that are necessary to climb the steep grade of the knoll.

The Brown Family Monument requires very gentle cleaning to remove biological and atmospheric soiling from marble and granite. The work includes manual applications of cleaning agents and rinsing, and ultra-low pressure abrasive techniques following pre-consolidation treatment, especially for the angels. Careful hand-raking and repointing of jointing is required throughout the monument using custom-mixed soft mortar formulations, as well as field testing and consideration of marble consolidant treatment. The selective recarving of inscriptions may be considered to restore legibility (e.g., John Moffitt, sculpt.). Replication of the missing carved marble floral bouquet finial shall be included, along with examination and re-anchoring of the three existing finials and marble cross.

Within the Family Plot it will be necessary to reset level and true the four granite step blocks around the plinth of the monument and reset or replace the broken crosses on two gravestones. The granite approach steps require cleaning and repointing.