Dr. Anthony Fauci, head of the National Institute of Allergy and Infectious Diseases at the National Institutes of Health, was appointed in January to the Trump Administration’s White House Coronavirus Task Force. With his almost-daily appearances at nationally-televised press conferences, and his science-based approach, he has become famous. 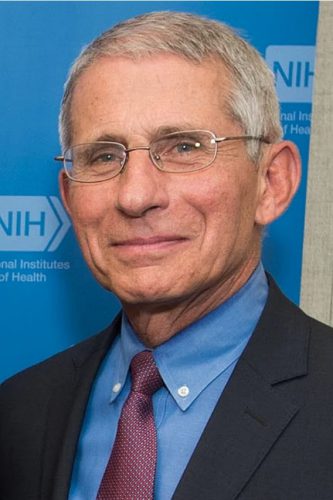 Dr. Fauci has had an extraordinary career pioneering the science of human immune responses. He has served every United States President since Ronald Reagan. In 2003, a survey found that Dr. Fauci was the 13th most-cited scientist in the world in the twenty years between 1983 and 2002. In 2008, Dr. Fauci was awarded the Presidential Medal of Freedom by President George W. Bush. That, along with the Congressional Gold Medal, is the highest award given to United States civilians. He has received many other awards during his distinguished career, including the John Dirks Canada Gairdner Global Health Award in 2016, given to the world’s top scientists in global health research. He has been on the front lines of  the HIV, 9/11, Ebola, and now the Covid-19 crises.

Anthony Fauci has deep roots in Brooklyn, where he grew up, and at Green-Wood, where his parents and grandparents are interred. In an interview that appears on the NIH website, Dr. Fauci describes his Brooklyn childhood:

I was born in Brooklyn, New York. My grandparents on both my mother’s and father’s side were born in Italy, except for my grandfather on my mother’s side, who was born in Switzerland. They came to the United States at the end of the nineteenth century. Both my parents were born in New York City and went to public schools in New York City. My father, Stephen Fauci, graduated from the College of Pharmacy, Columbia University, as a pharmacist. My mother, Eugenia Fauci, went to Brooklyn College and Hunter College. They married very young, when they were eighteen years old, and went to college after they were married, while they were still growing up. I went to the neighborhood parochial schools in New York City. I was brought up in a Catholic grammar and high school environment. I went to Our Lady of Guadeloupe Grammar School in Brooklyn and to Regis High School, a Jesuit high school in Manhattan. I had the interesting experience of having to take a bus and three separate subway trains to get from my home in Brooklyn to high school in Manhattan. I believe that my childhood was a typical, very happy, and very active growing-up period in New York City during the early forties. I was born in December of 1940 in New York City and grew up as a child in the World War II and post World War II years.

My major interest was sports. I lived in a very sports-oriented neighborhood. We used to play basketball from the beginning of the basketball season to the end, baseball throughout the spring and the summer, and then basketball and football again in the winter. My sister, who is three years older than I, also went through the same sort of school system, same grammar school I went to, went to an all-girls’ Catholic high school, and ultimately St. John’s University in New York City. She was a teacher before she stopped to raise her family.

In his NIH interview, Dr. Fauci traced much of what guides his thought and communication skills back to the Jesuits, from whom he learned at both his high school, Regis, and his college, Holy Cross:

I credit very much the Jesuit training in precision of thought and economy of expression in solving and expressing a problem and in the presentation of a solution in a very succinct, accurate way. This has had a major, positive influence on the fact that I enjoy very much and am fairly good at being able to communicate scientific principles or principles of basic and clinical research without getting very profuse and off on tangents. This is something that was drilled into us from the very early days in high school.

Dr. Fauci’s deep roots in Brooklyn go back to his being born there, on the day before Christmas, 1940. His parents, Stephen Antonio Fauci (though he is referred to in some reports as Stephen Anthony Fauci, when he registered for World War II, he wrote his middle name twice as “Antonio”) and Eugenia Lillian Fauci, owned the Fauci Pharmacy in Dyker Heights, Brooklyn, at 83rd Street and 13th Avenue. 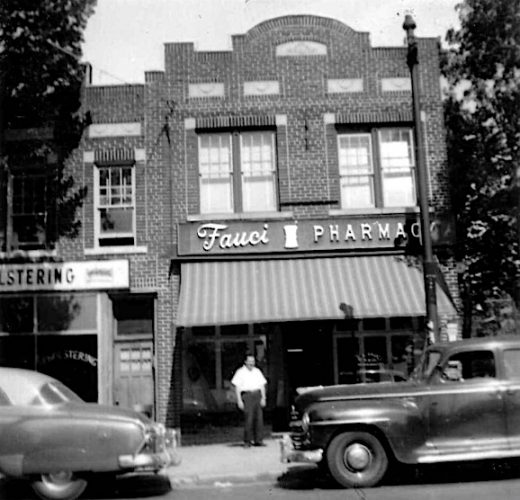 The Fauci Pharmacy. The family lived in the apartment above it.

The Faucis lived for a time in Bensonhurst, which back then was largely an Italian-American community. His father, a variation of whose name he bears (his father was Stephen Antonio; he is Anthony Stephen), graduated from Brooklyn’s New Utrecht High School in 1928, then got his degree in pharmacy from Columbia University in 1932. The Fauci Pharmacy was a family affair:  his father filled the prescriptions, his mother and sister worked the cash register, and Anthony made the deliveries. They lived near or above that pharmacy for years.

From his earliest years, Anthony Fauci loved playing sports. As the age of 10, he was playing basketball in the Athletic Association of the Shrine of St. Bernadette at 8210 13th Avenue. A year later he received a trophy for his play on the Bantamweight Gold team at St. Bernadette. He continued to play basketball and baseball, and became the captain of the basketball team at Regis High School, an academically-rigorous Jesuit school. 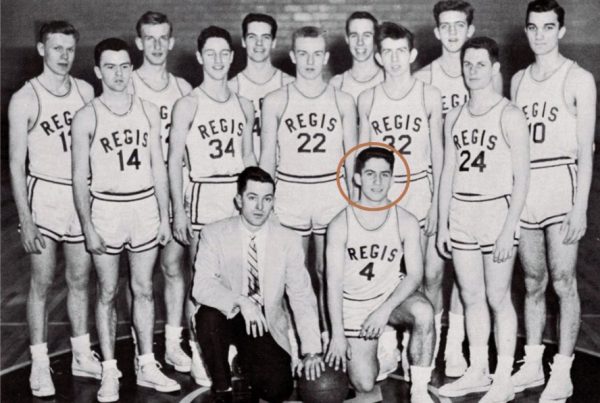 Anthony Fauci, circled, the captain of the Regis High School basketball team. Courtesy of the Academy of Achievement.

Because everyone who has grown up in Brooklyn has an opinion as to its best pizza, we will note here, for the sake of the historical record, that, as per a 2013 interview of Dr. Fauci, posted on, of all places, the website “This Week in Virology,” “probably the best pizza I ever had” was from Siroco’s Restaurant (since morphed into a caterer). It was located at 81st Street and 13th Avenue, just two blocks from where Dr. Fauci grew up.

Dr. Fauci received his M.D. from Cornell University Medical College, at York Avenue and 68th-69th Street in Manhattan, in 1966. He then joined the federal government’s National Institutes of Health, but left briefly: “I finished medical school and I did internship and two years of residency in Internal Medicine at the New York Hospital Cornell Medical Center and then I came down to the NIH for a three-year fellowship combined Infectious Diseases/Immunology.” He has worked at NIH since 1972, rising through the ranks to his current position, which he has held since 1984.

His family is interred at Green-Wood in section 6, lot 35792. Here is the central monument in the Fauci family’s lot: 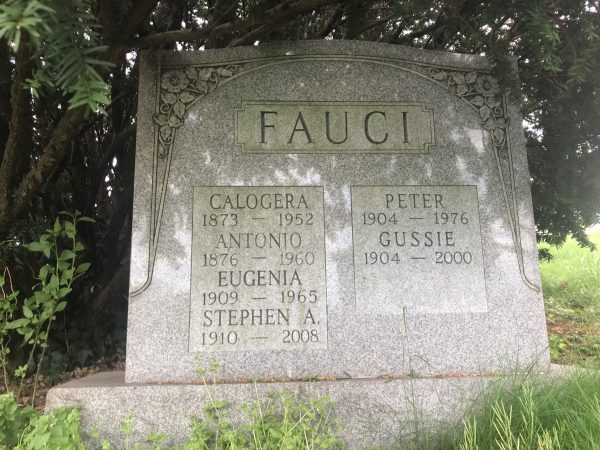 This is the granite marker in the Fauci lot. His paternal grandparents, Calogera and Antonio, were immigrants from Sciacca, Sicily, in southern Italy. Eugenia was Dr. Fauci’s mother and Stephen A. was his father. Peter and Gussie Fauci were husband and wife. Photograph by Kenneth McKenzie. 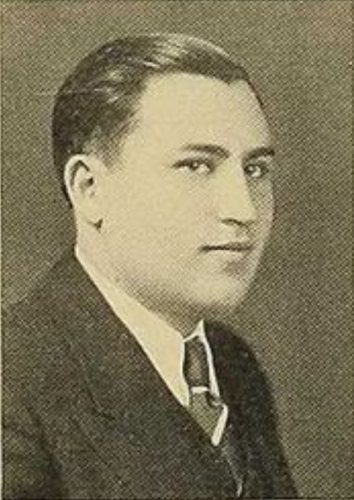 Stephen Antonio Fauci, born in Brooklyn, lived there for his entire life. He also worked as a pharmacist and raised his family there. He was Dr. Anthony Fauci’s father.

Upon Stephen’s death in 2008, an announcement in The New York Times described him as “much loved for his kindness and sense of humor.” It also noted that he had worked at the Memorial Sloan-Kettering pharmacy.

Dr. Fauci’s mother, Eugenia Lillian Fauci, influenced him to become a doctor. As Dr. Fauci said in an interview for the NIH:  “Also, I think there was subliminal stimulation from my mother, who, right from the very beginning when I was born, wanted me to be a physician. She never really pressured me in any way, but I think I subtly picked up the vibrations that she wanted very much for me to be a physician.”

The following words of Dr. Fauci sum up his approach to his work, an approach influenced by the Jesuits of his high school and college who taught him about the importance of service to others: “Taking care of someone who’s really sick surprised me because depending upon what your fundamental nature is–and this isn’t good or bad or better, it’s just the way you are–the sicker the patient, the better I function. That’s why I went into infectious diseases ultimately.” Having spent his formative years in Brooklyn, and Jesuit-trained, he has devoted his long and honorable career to using his great expertise to help others.