COVID-19 Update: All entrances open to pedestrians daily, 8am-6pm (click for details)
Honored by NYPD-A Century After Their Deaths
By Jeff Richman on December 22nd, 2017 in Green-Wood Historian Blog, Uncategorized

On November 29, 2017, just a few weeks ago, officials and the public gathered outside Police Headquarters in Manhattan to honor police officers who died in the line of duty—but had not been honored before because their deaths had occurred as the result of an accident or while they were off duty. Such deaths are now routinely honored by the NYPD—but these men, over the years, had not been. The 18 officers who were honored died between 1869 and 2011; the list was compiled by NYPD department chiefs. The officers’ names will be inscribed on an honor wall at One Police Plaza. As the New York Daily News reported, NYPD Commissioner James O’Neill said at the ceremony: “Today we ensure their sacrifices were never lost to time. For decades, for some more than a century, their names were not on these walls. That wasn’t right. Today, that changes.”

Two of these men, killed in the line of duty about a century ago, are interred at Green-Wood. Thanks to Theresa LaBianca, Green-Wood’s researcher extraordinaire, for her work identifying the two police officers who are interred at the cemetery. Great job!

Police Officer William Galbraith, in 1911, was a native New Yorker living at 1559 Lexington Avenue, between 99th and 100th Streets in Manhattan. On November 2, 1911, with 14 years on the job, he was on routine mounted patrol in the Bronx. 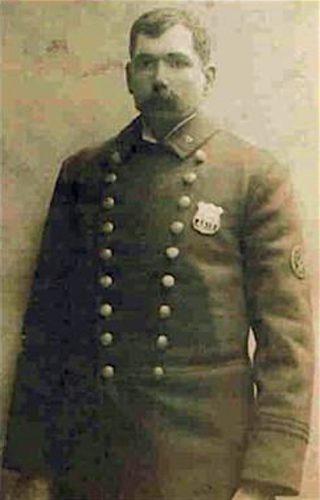 Police Officer William Galbraith was on routine mounted patrol in the Bronx when he was thrown from his horse and landed on his head.

A civilian, C.J. Borgstede, was driving his automobile along Walton Avenue that night when, in a deserted area, he saw a uniformed policeman lying in the road, bleeding from his forehead and looking like he was dead. It appears that the officer had been thrown from his horse and landed on his head. Borgstede managed to locate a telephone nearby and called the Tremont Station to report what he had seen. Half a dozen officers and detectives rushed to the location, where they found Officer Galbraith unconscious in the road. A doctor was summoned and Galbraith was transported to Fordham Hospital.  Meantime, Galbraith’s horse was found seven blocks away by a civilian, one John McGenen, who walked the animal to the station house.  Police Officer Galbraith had suffered a skull fracture and a cerebral hemorrhage; he died on November 8 at Fordham Hospital at the age of 42, leaving behind a wife and two young children. He is interred in section 122, lot 17806, grave 347–a public lot on the Hill of Graves. 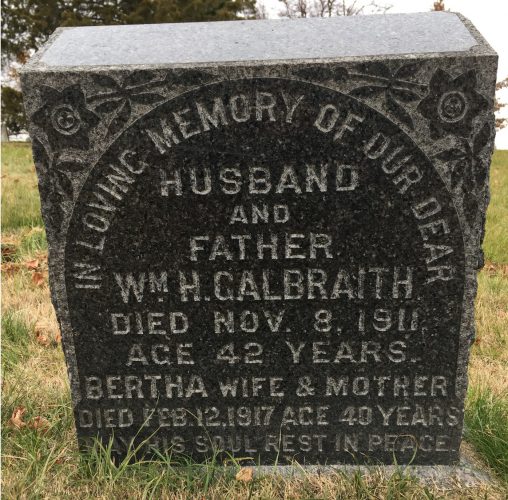 Police Officer William Galbraith’s gravestone, on Green-Wood’s Hill of Graves. It is very curious that there is no mention whatsoever here of his service, nor of his death in the line of duty.

Police Officer Gustave A. Boettger, Jr., a Brooklyn native who had married Cora Doerick in 1909, when he was 26 and she was 24, was on the job, working mounted on the traffic squad, in 1910. 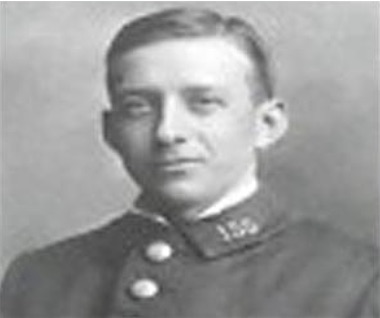 As he scanned the street, he saw a horse, pulling a wagon, bolt down Fulton Street, with its driver still aboard. Boettger managed to catch up to the wagon and grab the horse’s bridle. But, as he did so, another vehicle knocked the officer off his horse. He then was dragged down the street and was struck by still another vehicle, which fractured his skull. Undeterred, Boettger persisted, remounting his horse and, with the help of another officer, capturing the runaway. Boettger then collapsed and was transported to a nearby hospital.

As per a descendant, third great nephew Daniel Conroy, who spoke with the New York Daily News at the recent ceremony honoring Boettger and the others, “He had a steel plate put in his head . . . . He lingered close to death for six months but then he fought his way back to the department.” Conroy told the News that he was stunned to learn about his great-great uncle’s career, which included more than 1,000 arrests and countless rescues. “According to one story he dangled from a chain so he could swoop down and save a 19-month-old baby from a fire,” Conroy said. “My grandmother always told me stories of him but I really didn’t believe them until I did my own research and found the details in the paper.” 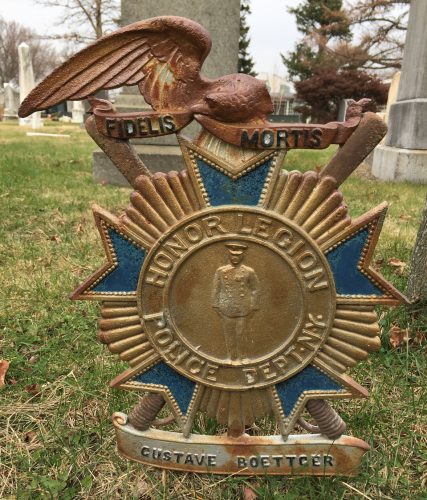 This metal plaque honors Police Officer Gustave Boettinger, Jr. His grave is unmarked, but it soon will be marked by Green-Wood’s Unmarked Grave Project.