COVID-19 Update: All entrances open daily, main gates from 7am - 7pm (click for details)
We Have A Winner!
By Jeff Richman on March 24th, 2014 in Green-Wood Historian Blog, Uncategorized

The New York Landmarks Conservancy’s Lucy G. Moses Awards Committee has announced that the recently completed restoration project of the Green-Wood Cemetery Gatehouse at the Fort Hamilton Parkway entrance has been selected to receive a 2013 Preservation Project Award. Platt Byard Dovell White Architects, which worked on the restoration from 2010 to 2013, led by partner Samuel G. White, submitted the nomination. For an earlier blog post on this work, click here.

That entrance, constructed circa 1876, was designed by architect Richard Michell Upjohn, who is interred at Green-Wood.

In the nominating papers, the restoration project is described as follows: 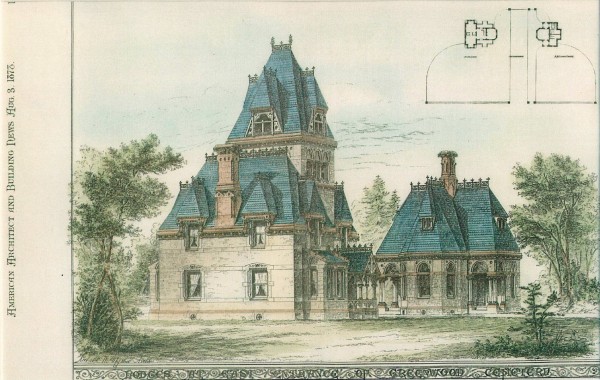 This drawing of the gatehouses appeared in August 1876 edition of American Architect and Building News. 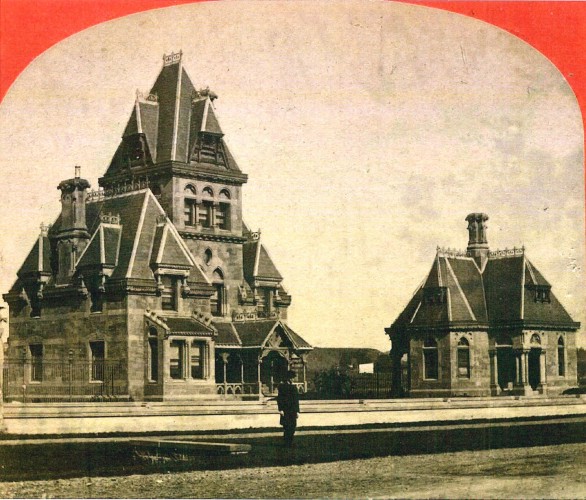 The gatehouses, along what is now Fort Hamilton Parkway, photographed soon after they were built.

In addition to its monumental main entry gate, Green-Wood has two other smaller entries, each with a caretaker’s residence and a guest cottage. The cottages offered a welcome place to rest after one’s often-long journey to the cemetery, and recall the front parlor of a contemporary brownstone rowhouse. The residences housed the two caretakers, who met guests at the entry and cared for the cemetery’s 478 acres. The Fort Hamilton entry is used on weekends, and its guest cottage is open to visitors. The caretaker’s residence is still in use, but future plans include its renovation to a visitor’s center.

Restoration work at both the Residence and Cottage included: 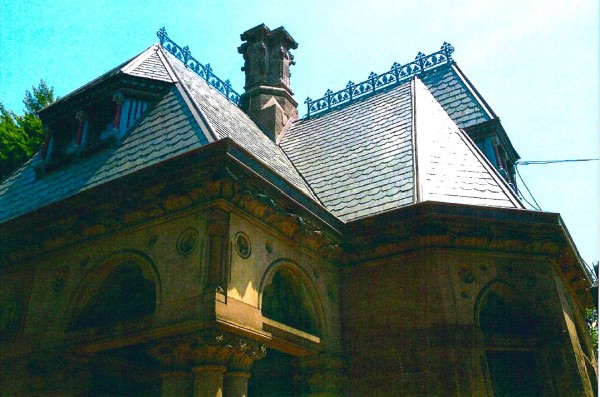 The Visitors’ Lounge (also known as the Cottage), after restoration.

• New cast iron cresting at all roof ridges, to match the original design;

• Woodwork restoration, including dormers, porches and original wood windows; and 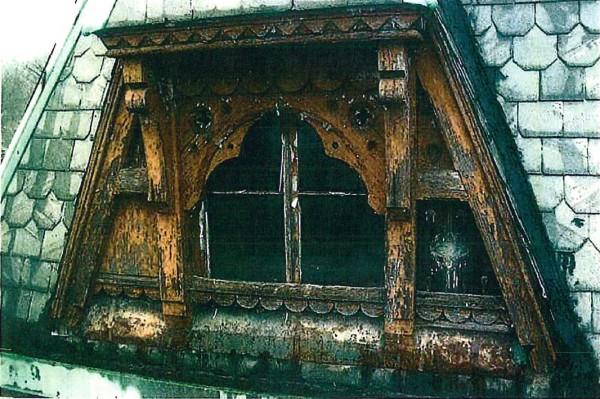 Here’s one of the windows, before restoration.

• Painting all woodwork as well as non-original PVC clad windows.

The distinguishing architectural feature of both the Residence and Visitor’s Cottage is the cast iron cresting that decorates each pitched roof ridge. Only a small portion of the original cast iron remained from which to re-create the unique sections of cresting that adorned the numerous pitched roofs. Using the few remaining pieces, and working with cast iron fabricator Allen Architectural, we were able to reproduce the original configuration of each unique section of cresting.

The other challenge was to replicate the widow’s walk atop the main tower of the Residence. Dating to at least the 1920’s, the original widow’s walk appeared to be fabricated of wrought iron, and featured exuberant corner finials that echoed the ivy motif found in the original cast iron cresting below. Based on original photographs, fabricator Allen Architectural recreated the original lacy design of the railing using the modern advance of laser cutting from sheets of steel. 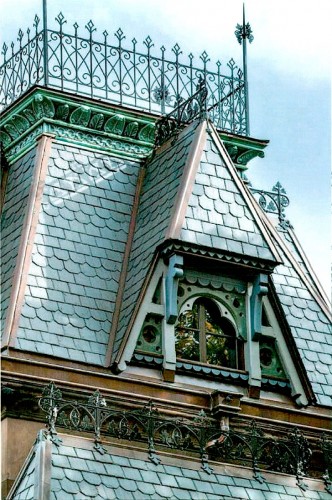 The restored cast iron cresting includes this widow’s walk atop the Gatekeeper’s Residence.

Here is a late 19th-century photograph of the Gatekeeper’s Residence: 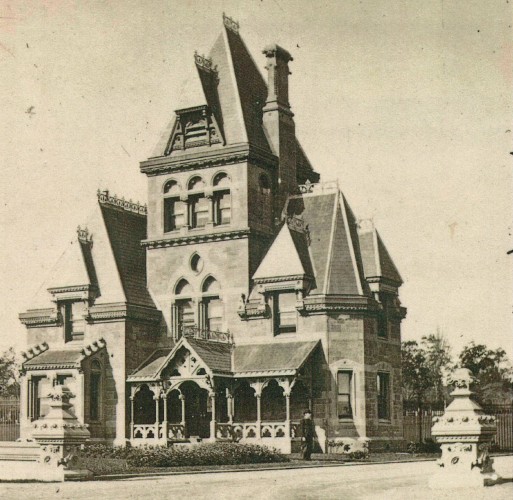 The gatekeeper’s residence, circa 1890.

And here is the same building, after its recent restoration: 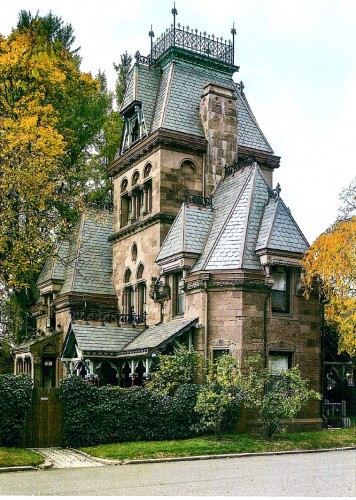 The gatekeeper’s residence along Fort Hamilton Parkway, after restoration. 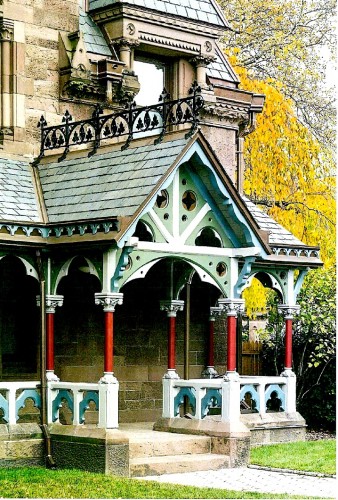 A porch of the residence, restored and repainted.

The design architects for the restoration were Joseph & Adrienne Bresnan, who retired before construction on the buildings was underway.

The Lucy G. Moses Awards will be presented on the evening of May 6 at the award-winning and recently restored Williamsburgh Savings Bank, 175 Broadway, Brooklyn.

Congratulations to all of those who took part in Green-Wood’s winning project.