This past Saturday, Joe Edgette, who has been studying the Titanic and its passengers for many years, and is also expert on all things cemetery, led a tour of Green-Wood’s Titanic-related sites. Our trolley and caboose were full–this tour sold out weeks ago.

Green-Wood has both Titanic survivors and those who perished in the disaster. Little (Robert) Douglas Spedden, six years old, managed to survive with his parents and nurse, clinging to his beloved bear, “Polar,” a purchase from the toy store of all toy stores, F.A.O. Schwarz (who is himself interred at Green-Wood). Douglas’s mother, Margaretta Corning Spedden, who is also interred up on Battle Hill with him, wrote and illustrated a book about his beloved bear and presented it to Douglas as a gift on Christmas Day, 1913. It recently has been published by Leighton Coleman III, who found it in his family’s papers. Several months ago, Leighton came on one of my tours, showed me Douglas’s grave, and sent me a copy of the book. For Leighton’s introduction to the book click here. Douglas met a sad ending; in 1915, still but nine years old, he ran into the street after a tennis ball near his family’s Maine estate and was hit by a car. He died, the first fatality from an automobile accident in the history of that state. 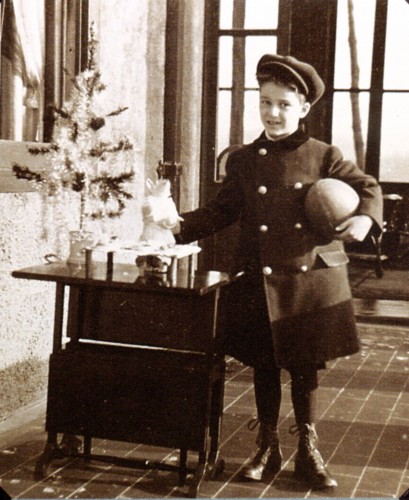 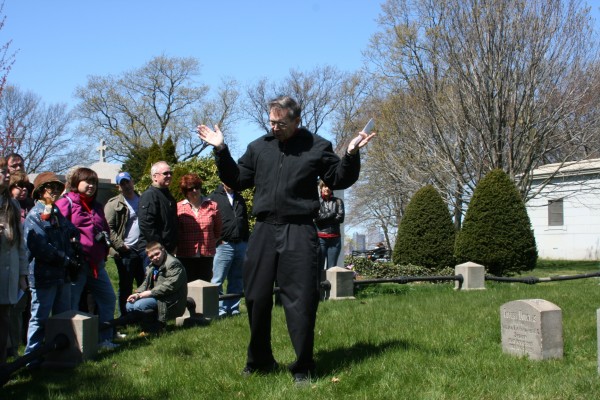 Joe Edgette telling the story of Douglas Spedden and his bear at the Corning Family Lot on Green-Wood's Battle Hill. Douglas's gravestone is to the right.

We also visited the Harder Mausoleum. Sidney Whalen, whose mother was the sister of George Harder, a Titanic survivor, generously opened it up for all on the tour to visit. 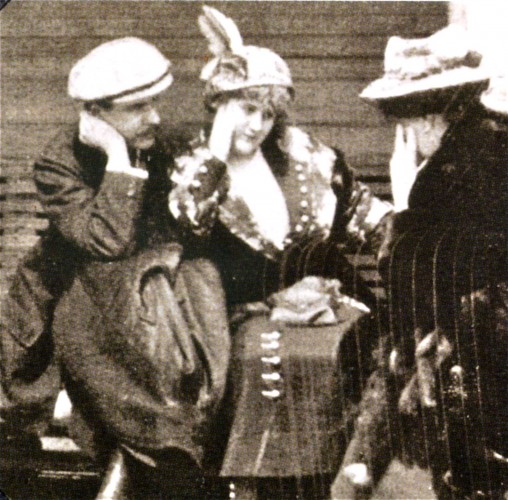 George and Dorothy Harder, aboard the rescue ship Carpathia, console Clara Jennnings Hays, whose husband, president of the Grand Trunk Railway, was lost.

Sidney also read from his uncle’s Senate testimony about what he had witnessed and told about the nightmares George had for the rest of his life as a result of what he had seen and done to survive. 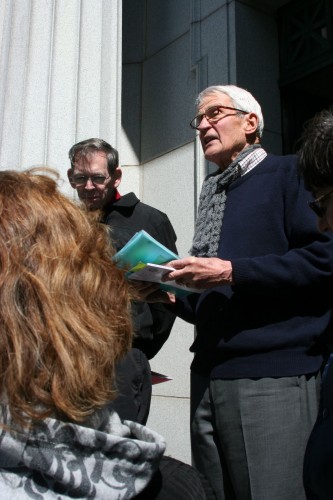 Sidney Whelan, reading from the Senate testimony of his uncle, George Achilles Harder, about the Titanic disaster. 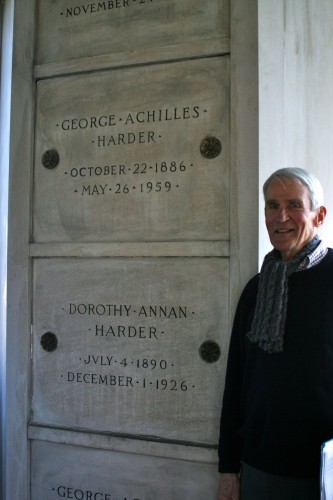 Sidney Whelan inside the Harder Mausoleum, next to the marble carvings marking the places of interment of his uncle, George Harder, and George's wife Dorothy, both of whom survived the sinking of the Titanic.

As I was preparing for this tour, I received an e-mail from Fold3, an online National Archives database that I subscribe to. It wrote about the Titanic and included links to World War II registration cards for four of the Titanic survivors. One of them was for George Harder; here’s his registration card, dated April 27, 1942 (just over 30 years after the Titanic’s sinking) on its back. 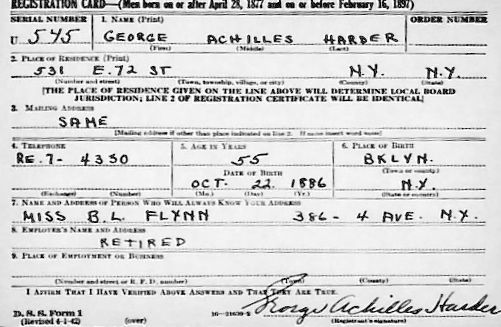 Wyckoff Van Derhoef lived at 109 Joralemon Street in Brooklyn Heights, just west of its intersection with Henry Street. He was the secretary of the Williamsburg City Fire Insurance Company. Vanderhoef was lost on the Titanic. But four days after its sinking, when his fate still was unclear, a reporter for the Brooklyn Daily Times contacted the president of Williamsburg City, asking for comment; it was reported that the president was “still holding out hope that Mr. Von Derhoef (sic) is alive; that he may have been picked up by another steamer and that he may eventually turn up.” But that was not to be; Wyckoff Van Derhoef’s body was pulled from the sea and his remains were interred at Green-Wood on May 3, 18 days after he had died. 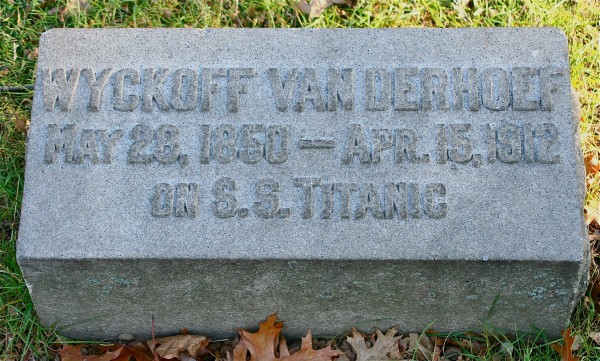 Wyckoff Van Derhoef's body was the 245th body brought out of the icy waters by the crew of the ship Mackay-Bennett. Here is the information the crew recorded about him.

We also visited the cenotaph (a cemetery monument for someone whose body is not present there) memorializing William Augustus Spencer, a wealthy New Yorker (part of the Spencer family that intermarried with the fabulously-wealthy Lorillards of tobacco fame and fortune) who died when the Titanic went down, “Where Manhood Perished Not.” 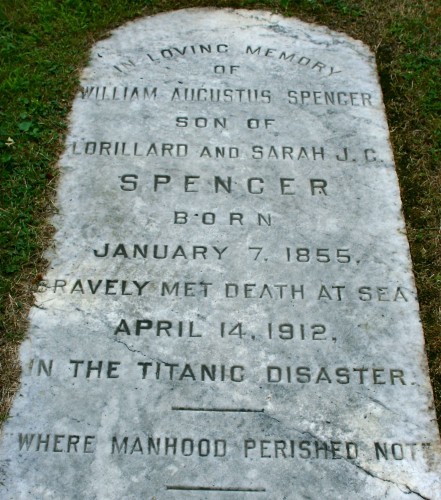 The cenotaph at Green-Wood to William Augustus Spencer, who, according to the inscription, "Bravely Met Death At Sea."

Note that that last line on this stone, “Where Manhood Perished Not,” is in quotations. That is a reference to the poem of that title, written in 1912 by Harvey P. Thew, which reads:

Where cross the lines of forty north and fifty-fourteen west,

there rolls a wild and greedy sea with death upon its crest.

No stone or wreath from human hands will ever mark the spot.

Where fifteen hundred men went down, but Manhood perished not.

No shafts adorn the ocean graves, nor weeping willows grow.

Nor is there need of marble slab to keep in mind the spot.

Where noble men went down to death, but manhood perished not!

Those men who looked on death and smiled, and trod the crumbling deck.

Have saved much more than precious lives from out that awful wreck.

Though countless joys and hopes and fears were shattered at a breath,

Tis something that the name of Man did not go down to death.

Tis not an easy thing to die, e’en in the open air.

Twelve hundred miles from home and friends in a shroud of black despair.

Will ever blossom o’er the waves where Manhood perished not.

8 thoughts on “Remembering The Titanic”