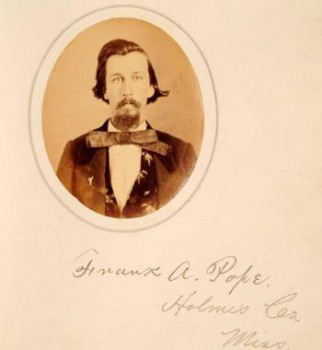 A few nights ago, I was working my way through forms that have been filled out several months ago by our Green-Wood Historic Fund Civil War Project volunteers. The volunteers go through the cemetery’s chronological books, recording the vital statistics (name, place of birth, place of death, last residence, cause of death, and age at death) of men of appropriate age to have served in the Civil War. I then go online and try to determine if the information on the forms matches that of a Civil War veteran. Sometimes nothing matches for hours; other times it can lead to great discoveries.

So, I picked up the form for a Frank A. Pope, who died in 1880 at the age of 40. Most interestingly, his birthplace was listed as Mississippi. A Confederate, perhaps? Well, I checked a database of Confederates; 6 men named Frank Pope had served the Confederacy, but only 2 with the middle initial of A, and only one from Mississippi. So I went on Footnote, the subscription website of the National Archives, and found the military records of the Frank A. Pope who had served in the 29th Mississippi Infantry as a first lieutenant. Pope had enlisted in 1862, was captured at Lookout Mountain, Tennessee, on November 24, 1863, by men under the command of Major General George Thomas (who had one of the great Civil War nicknames, “The Rock of Chickamauga”) and was held as a prisoner of war on Johnson’s Island, Michigan, until June 13, 1865, when he signed an oath of allegiance to the United States and was released from custody. An interesting story. But was he the Frank A. Pope interred at Green-Wood Cemetery? I needed an age for the soldier. And there it was: the Frank A. Pope had given his oath of allegiance at the age of 26. That means he was likely born in 1838. And the Frank A. Pope interred at Green-Wood was likely born in 1839. Close enough, given that both the soldier and the interee had a link to Mississippi, and the rarity of the name, to be a match. Now I googled him, looking for anything else that might pop up on the Internet. And look what I found! There it is, above, a photograph from the yearbook of the University of Mississippi, class of 1861, of a Frank A. Pope. The age looks right–the man interred at Green-Wood, the Confederate lieutenant, would have been about 22 or so here. And, amazingly, look at the notation below his name: Holmes County, Mississippi. So where do you think First Lieutenant Frank A. Pope enlisted on March 15, 1862? It was Lexington, Mississippi, which, a little research reveals, is the county seat of Holmes County, Mississippi. I think that’s our man, looking back at us after all these years! 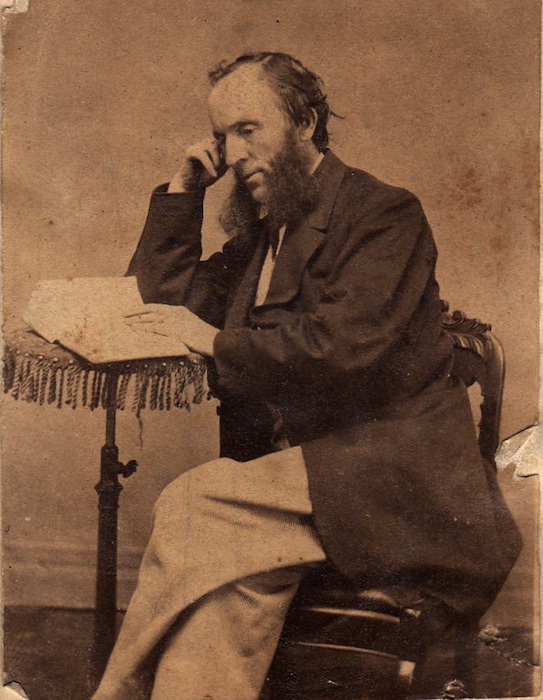 And another one, courtesy of Sue Ramsey, researcher extraordinaire, and happily for all concerned one of our Civil War Project volunteers. Sue, who lives out in spectacular Santa Barbara, California, has been going through our Civil War biographies, checking and supplementing them. She came across a biography for Samuel Brevoort, then went to work, and found his family tree online. She contacted the poster, and discovered he lives in California also. He sent along this wonderful photograph of Samuel, which he has given us permission to use. Are those some great sideburns, named for Major General Ambrose Burnside? The Brevoort descendant also sent along links to newspaper articles reporting that Samuel had been named a special aide to New York City’s police commissioner and had been elected a New York assemblyman. Here’s the photograph of Samuel, circa 1860. It turns out that this descendant also had information about another ancestor who had served in the Civil War and is interred at Green-Wood. He will be added to our biographical dictionary shortly. Quite the finds, don’t you think?!!