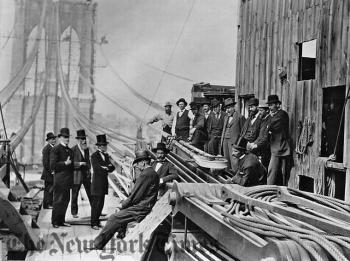 My son just e-mailed this link to me.

If you scroll slightly down the page, you will see some great photographs of New York City a century or so ago. It appears many, if not all, are from The New York Times. Some incredible images of men balancing on girders high above Manhattan–even one of Laurel and Hardy. There also seems to be one of a city that is not New York–my son, who lives in Chicago, tells me it is the Windy City. See if you can figure out which one that is.

My favorite photograph in the group is one of my all time favorites–the 9th photograph from the bottom of this group. It is in fact a photograph of the Brooklyn Bridge under construction, dating from the 1870s–not exactly the beginning of the 20th century. You can really see how the cables were attached to the anchors bars at the top of this anchorage. For our purposes, that is as a Green-Wood Cemetery blog, the men pictured are particularly intriguing. Fourth from the left, with his arms folded, is Henry Cruse Murphy. He was “The Moses of the Brooklyn Bridge”–a prominent lawyer and politician, he was present for the Great Bridge’s birth in the New York State legislature, shaping the bill authorizing the East River Bridge Company and making sure that it passed, only to die just before reaching the Promised Land, the bridge completion and opening in May, 1883. We have a book from Murphy’s library in our Historic Fund Collections. Several members of the engineering staff appear at right, including George McNulty, who was in charge of the Brooklyn approaches and terminal. That’s McNulty, leaning on his elbow, the closest to the camera of the group at the right. Sadly, McNulty lies in an unmarked grave at Green-Wood. And, if I recall correctly, Orestes Penthilus Quintard (wow–that is quite a name, ain’t it?), the corporate secretary of the Bridge, and also a Green-Wood permanent resident, is in this photograph somewhere.