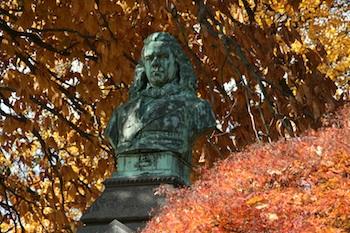 July 5, 1810: Henry Cruse Murphy; the “Moses of the Brooklyn Bridge;” played a key role in its construction, only to die just months before the Bridge opened; born in Brooklyn; died in 1882 in Brooklyn.

July 9, 1819: Elias Howe; inventor of the sewing machine; born in Spencer, Massachusetts; died in 1867 in Brooklyn. His bronze bust, atop the Howe family’s central monument at Green-Wood, by sculptor Charles Calverley, is above.

July 18, 1830: Paul Ambrose Oliver; Civil War Congressional Medal of Honor winner, who is credited with inventing black powder and dynamite; born on shipboard in the English Channel; died 1912. We have in our Historic Fund Collections Oliver’s lap desk and many of his papers from that desk. 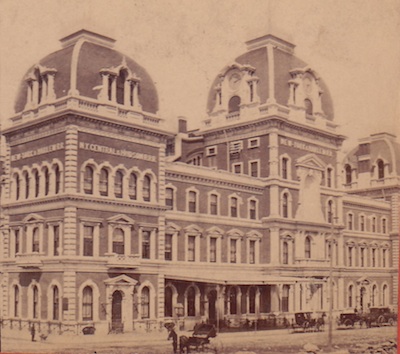 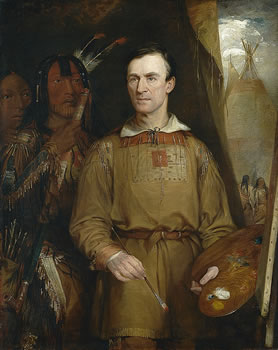 July 29, 1824: Eastman Johnson; one of the best-known and most fashionable American painters of his time; best-known for his genre paintings, sentimental scenes of everyday life, and his portraits of the prominent men of the time, as well as his depictions of prosperous New York families in domestic scenes; born in Lowell, Maine; died in New York City in 1906. And here’s Johnson’s painting, “Old Kentucky Home:” 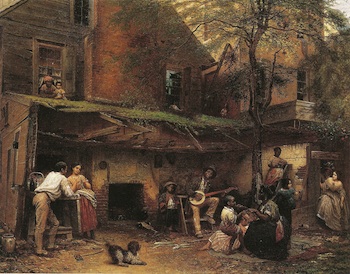 July 29, 1795: Walter Hunt; inventor of the safety pin, the lock-stitched sewing machine, suction shoes to walk on ceilings, and the fountain pen; born in Susanna, New York; died in 1859.

Thanks to Joshua Salter for his work on this calendar.