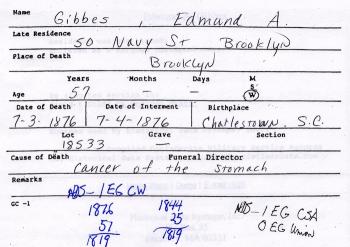 In September, 2002, we launched The Green-Wood Historic Fund’s Civil War Project. Our goal was to identify those who had served, to tell their story, and to honor them. When we began, we naively thought, based on numbers from those who had searched Green-Wood Cemetery over the years, that there were 500 or so Civil War veterans interred there. Were we wrong! In the ensuing years, with the help of hundreds of dedicated volunteers, we have searched through newspapers, books, muster rolls, as well as many other resources. Descendants and researchers have contacted us from all over America and the world with information and photographs.

And we continue our efforts to identify men who served during the Civil War. Since mid-2002, our Civil War Project volunteers, once or so a month on Research Days, have been going through the cemetery’s chronological books (which list every burial at Green-Wood between 1840 and 1937), recording information for men of appropriate age to have served in the Civil War. I, as the Green-Wood Cemetery historian, have then checked those names, life dates, and other information against several online Civil War databases, trying to match up the men interred at Green-Wood to soldier histories.

A few days ago I was working on these forms. I went through about 100 with no matches. Then I came across the form above. What immediately caught my eye was his listed place of birth: Charlestown (sic), S(outh) C(arolina). That looked intriguing we’ve already found about 70 Confederates at Green-Wood. Perhaps we had another one here? So, I put Gibbes, Edmund, into a database and up popped the information that a man named Edmund A. Gibbes has served on the medical staff of the Confederate forces. That looked very good. Middle initials are important and here was a match of first name, middle initial, and last names. Further, the database told me that, of the 6 million men who served in the Civil War, for North and South, there had been only one named Edmund Gibbes. We might be on to something here!

And, indeed we were. I checked footnote.com, a website of the National Archives, that has great access to Confederate records. And here’s what emerged: Edmund A. Gibbes, acting assistant surgeon with the Confederate field and staff, had ties to New York. In fact, he had been arrested in November, 1861, as disloyal to the Confederacy, apparently due to his visit to New York City, after the war began, in his efforts to collect as $16,000 debt. There on Footnote were the orders committing him to custody (from the marshall and the jailer), his 5 page affidavit, in his own hand, insisting on his loyalty to the Confederacy and South Carolina, and denying he had taken an oath of allegiance to the Union. He specified that he had purchased $6000 of Confederate stock and $5000 in state bonds early in the war, and added that “his property Real and personal is worth more than three hundred thousand dollars.” Now, for those of you who don’t know, $300,000 was real money in 1861 tremendous wealth.

Further research revealed that Gibbes owned 5 buildings in Charleston, South Carolina, in 1861, 3 of which were at least partially occupied by slaves. In all, it turns out, Gibbes owned 46 slaves. And look at this: a letter Gibbes wrote in 1866, just after the Civil War, describing the contract he had entered into with 5 men he had owned (he refers to them, now freemen, as “formerly belonging to me”), renting farmland on his plantation to them for 5 bushels of produce per acre:

Charleston, S.C.
March 9, 1866
Lieut. Jesse S. Craig
35th U.S.C.T. Inftry.
Comd. Post
Dear Sir,
Your letter of March 3rd requesting information regarding my plantation near Adam’s Run, &c has been received & in reply I would state, that the lands, premises, & c are leased for one year from Jan 1st 1866 to Samuel Gibbes, Sampson Fenwick, Gainey Singleton, Ancel Guerard & Harry Rivers; Freedmen formerly belonging to me. The terms are Five Bushels of produce to each acre of high land planted to be delivered to me as soon as harvested. I furnish nothing, & have no control over their actions whatever, they being at liberty to contract for labor with who they think proper, irrespective of former owners, & are amenable to the laws, as we all are. I have but little faith in written contracts, as they offer no more security than a verbal understanding between parties disposed to be just, hence this is a verbal contract between persons, who have known each other all their lives, but it was understood, that if the law required one, it must be at their expense. This contract was made as early as the first November 1865, with a reservation on my part, that if the landholders came to any determination, as to what course they would pursue, that I would feel myself bound to c??? with them, but as no such plan was followed, but each has entered upon his own course, I then concluded definitely(?) the terms here named on the 1st January 1866.
I have been repeatedly invited by them to visit the place, but in consequence of the absence of all comforts, I have not ???? done so, but I now contemplate going up there on Saturday by railroad to Edisto River, & by boat to the plantation, where I shall remain until Tuesday & return, I have no mode of conveyance to Adams Run, but if you will call on the place will be happy to see & confer further with you on Monday.
I remain Yours very Respectfully,
E.A. Gibbes

You can see the originals of the letter here.

I also checked Ancestry.com and found this passport application, 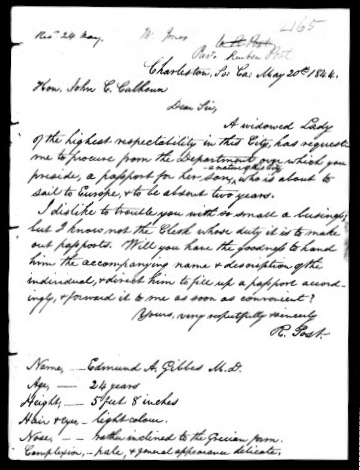 submitted by an attorney on behalf of “Edmund A. Gibbes M.D.” of Charleston, South Carolina, dated May 20, 1844, describing Gibbes as 24 years old, 5 feet 8 inches, light hair and eyes, with (get this!) a nose “rather inclined to the Grecian form” and a pale complexion, with a generally “delicate” appearance. What is most important here is that the good doctor was likely born in 1819 the same as the likely year of birth for the Edmund A. Gibbes who was interred at Green-Wood Cemetery in 1876.

Just one more note. In Three Rivers From An Ocean . . . Vignettes of Life in Charleston, SC (2003), by James Funk, the author relates that Emma Holmes wrote in her diary on October 14, 1861, that the government had sequestered the property of one Edmund Gibbes “for refusing to do military service, or pay his fine,” as well as writing “an insulting answer to the summons.” She described Mr. Gibbes as “an infidel and a notoriously wicked man”: “His only redeeming quality was his love for his mother,” she wrote. Though Emma’s understanding of why Gibbes had been arrested may not be quite accurate, her comment about Gibbes is priceless.