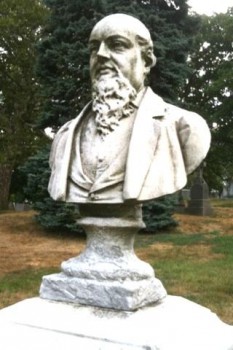 The more I see of Green-Wood, the more amazed I am. It’s a big place: 561,000 burials, 478 acres, 7,000 trees, tens of thousands of monuments. I’ve been wandering its grounds for twenty years now. And, I am still seeing so many things that I’ve never seen before.

A few weeks ago, I was checking the grave of a soldier who died in the Mexican War. Coming down the hill from that grave, I decided to take a close look at a sculpture (at right) that I have seen many times. 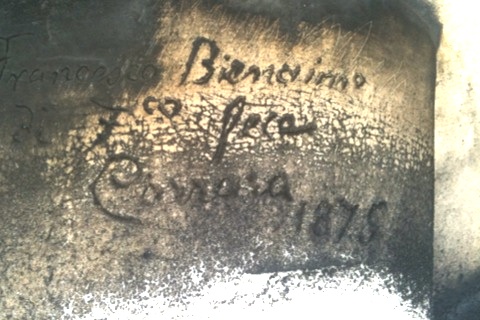 Fortunately, my closer look was rewarded. Below is what I found on the back of this sculpture: the name of the sculptor, that this marble was quarried and sculpted in Carrara, Italy, and its date of creation, 1875.

The sculptor’s name looks to me to be Francesco Bienaimo. I Googled him and didn’t find anything. But what is even more interesting is “Carrara.” Carrara is a town in Italy that has had excellent-quality white marble mines since Roman times. And, for centuries, Carrara has been a legendary place of stone and sculptors, turning all that marble into angels, portraits, and more. I remember, years ago, traveling on a train through Italy. As we came to one town, there were piles of very white marble stacked along the tracks. I wondered where we were, then saw a sign identifying the town as Carrara.

Though I have read in histories of Green-Wood that Carrara marble was used there (for instance the Sea Captain, John Correja, brought Carrara marble back from Italy on his ship; that stone was then carved into his monument), this is the first piece of sculpture at Green-Wood that I have found with an inscription identifying it as Carrara. And, with that plus the name of the sculptor and the date it was created on it–quite a find!

UPDATE: It looks like I misread the sculptor’s name. My favorite researcher, Sue Ramsey, performed her magic and found this in The Garden at Chatsworth, by the Duchess of Devonshire: “The length of the Broad Walk is flanked by statues. The Duke described his purchases from Italy: ‘Eight statues and two vases have been worked for me by Francesco Biename at Carrara of hard marble of that place, that appears to defy the climate of the Peak, and to resist all incipient vegatation on its surface. I think them a great addition; the eye reposes with pleasure on these classic forms.’” Another website that Sue found talks about the 1846 visit to Carrara by the Sixth Duke of Devonshire and his commissions to Biename. Sue also found this mention of Biename as a sculptor who received commissions from William Spencer Cavindish in the mid 19th century. And here’s a photograph of a Biename sculpture that sold at a 1992 Christie’s of London auction. Finally, Sue discovered that one of her favorite movies, Pride and Prejudice, starring Keira Knightley and Matthew Macfadyen, was filmed in 2005 at Chatsworth House. Perhaps the Biename sculptures have a bit part in that movie.