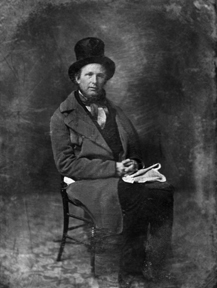 Horace Greeley, the founder and editor of the New York Tribune, was born in New Hampshire and apprenticed to a printer. When his master closed his business in 1831, Greeley set off, with $25 and his possessions in a handkerchief, for New York City. He worked a succession of jobs there, edited several publications, and in 1841, founded the New York Tribune, which he edited for the rest of his life.

Widely known for his ideals and moral fervor, Greeley advocated many causes, including workers’ rights, women’s rights (though not woman suffrage), scientific farming, free distribution of government lands, and the abolition of slavery and capital punishment. By the late 1850’s, the Tribune had a national influence as great as any other newspaper in the country, particularly in the rural North.

But [Greeley] always wanted very much to be a statesman. He served in Congress as a Whig for three months from 1848 to 1849, but ran unsuccessfully for the House of Representatives in 1850, 1868, and 1870, and for the U.S. Senate in 1861 and 1863. [His] political career ended tragically with his campaign for President as the Democratic and Liberal Republican candidate in 1872. In that campaign, Greeley urged leniency for the South, equal rights for white and blacks, and thrift and honesty in government. For these positions, he was attacked as a traitor, fool, and crank, and was derisively referred to by noted cartoonist Thomas Nast as “Horrors Greeley.” Greeley’s wife of thirty-six years died two weeks before the election, he was soundly defeated by Grant at the polls, and he returned to his beloved Tribune only to discover that its control had passed to Whitelaw Reid.

Weeks later, as Greeley lay on his deathbed, he looked up to see Whitelaw Reid, the man who had wrested control of his Tribune from him. Greeley, never one to mince words, could not restrain himself, snarling, “You son of a bitch, you stole my newspaper.” Reid was later asked what Greeley’s last words were. He diplomatically recalled them as “I know my redeemer liveth.”

Greeley’s funeral, held on December 4, 1872, was attended by President Grant, cabinet members, governors of three States, and an outpouring of mourners who remembered him as a beloved public figure.