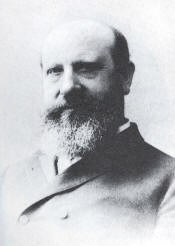 Frederick August Otto Schwarz (1836-1911) was a German immigrant from Herford, Westphalia, Germany who immigrated to the United States in 1856. At age fourteen, in Germany, he started apprenticing with a merchant and then began working with his brother in Baltimore as toy importers, importing many toys from Germany. Nineteenth-century Germany was known for its toy making and many toy stores in the United States stocked toys imported from Europe and Germany specifically. In 1870 he moved to New York and opened his own business, Schwarz Toy Bazaar. Because of his connections to toy markets in Germany, he was able to stock his store with the finest toys. In 1876 he began publishing a toy catalog that allowed the store to reach even larger audiences. Schwarz became the largest toy dealer in the world. Even as other department stores began selling toys, Schwarz remained a success in large part because of his marketing and advertising. In 1875 he decided to bring in Santa for the Christmas season to promote seasonal sales. This was before Macy’s and other department stores ever did this. The store continued to be a success even after Schwarz died in 1911, and still has a location in midtown that recently reopened.