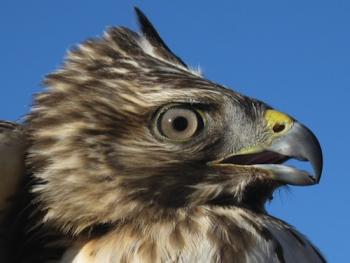 Green-Wood is many things: park, sculpture garden, arboretum, and wildlife preserve, to name a few. Just days ago, we added another bird to our population. A juvenile male red-tailed hawk was released into the wilds of Green-Wood Cemetery. It had been rehabilitated by Bobby Horvath and his wife Cathy. Bobby works as a fireman for FDNY. But he also is a licensed wildlife rehabilitator and founder of Wildlife in Need of Rescue and Rehabilitation (WINORR). Here he is with the hawk at Green-Wood. To read more about Bobby’s good works, click here.

And at right is Marge Raymond with the hawk. Marge has been bird-watching at Green-Wood for 25 years, taking part in the annual Green-Wood bird census year after year, and has been a tour guide for our Historic Fund for almost two years. Marge was really thrilled to be privileged to let this bird, hale and hearty, go free. Here’s a video (also embedded below), courtesy of Rob Jett, of The City Birder, of the release. Good thing the bird knew it was supposed to fly when Marge let it go! Within seconds of its release, the two red-tailed hawks nesting nearby went after it; that hillside is their territory! But our new red-tail quickly got the message, and found another spot in Green-Wood from which to savor his freedom.