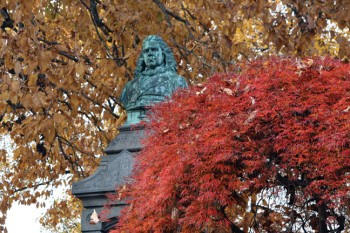 Everybody loves a great story, and Brooklyn’s Green-Wood Cemetery has many of New York’s great stories to tell. Everyone who was anybody in 19th-century New York wanted to be buried there, and they were. As The New York Times succinctly put it it 1866, “It is the ambition of the New Yorker to live upon Fifth Avenue, to take his airings in the [Central] Park, and to sleep with his fathers in Green-Wood.”

The famous and infamous have continued to come to Green-Wood for over a century and a half now, bringing their lively stories and dark secrets with them. Green-Wood has more than 560,000 permanent residents, including Leonard Bernstein, Boss Tweed, Charles Ebbets, Jean-Michel Basquiat, Louis Comfort Tiffany, Horace Greeley, baseball legends, politicians, artists, entertainers, inventors, and Civil War generals and other veterans (with more being discovered regularly by our Civil War Project). Here are only a few profiles of Green-Wood’s innumerable famous residents.

Here are biography pages of just a few of Green-Wood’s most notable residents:

William Magear “Boss” Tweed (1823-1878)
It has been estimated that during his reign of corruption, William Magear (“Boss”) Tweed, the “Tiger of Tammany,” and his political cronies stole $200 million (the equivalent of about $3.5 billion in today’s money) from the citizens of New York… More >

Henry Chadwick (1824-1908)
No man did more to popularize baseball than Henry Chadwick. A British-born newspaperman, Chadwick immigrated to America as a youth, and made Brooklyn his home. In 1847, at Elysian Fields in New Jersey, Chadwick played… More >

Leonard Bernstein (1918-1990)
Born in Massachusetts to Jewish immigrants from Russia, Leonard Bernstein resisted his father’s efforts to steer him into the family’s beauty-supply business, instead choosing a music career. After studying… More >

Horace Greeley (1811-1872)
Horace Greeley, the founder and editor of the New York Tribune, was born in New Hampshire and apprenticed to a printer. When his master closed his business in 1831, Greeley set off, with $25 and his possessions in a… More >