One of the best sculptures at Green-Wood Cemetery is the Valentine Angel by Adolfo Apolloni (1855-1933). I’ve taken many photographs of it, and it is still an honor to do so. It never fails to impress, front or back. 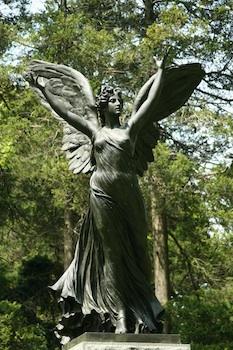 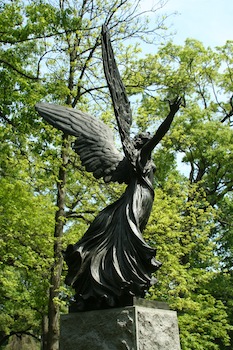 I recently got an e-mail from Cara, one of our Historic Fund volunteers, who had just discovered that an ancestor of hers had been married to Apolloni. She sent along photographs of the family lot at Saint Francis Cemetery in Pawtucket, Rhode Island. So who do you think sculpted the angel there? If you guessed Adolfo Apolloni, you are correct! And here’s a close-up of the angel. Notice the wonderful flow of the robes of both of these sculptures. 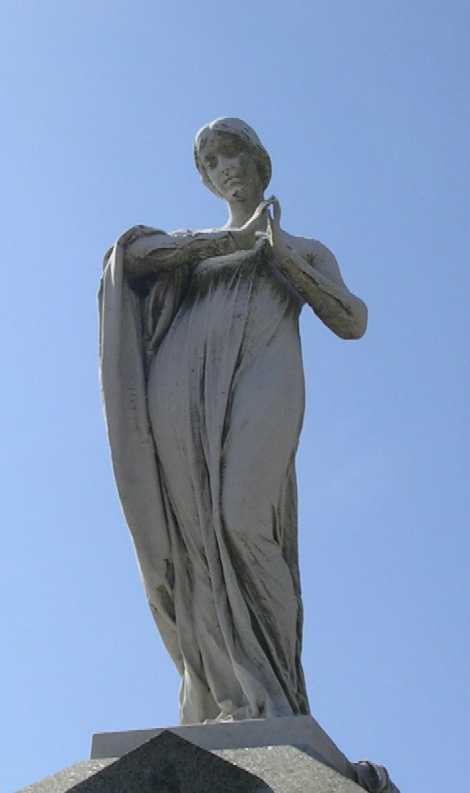 Adolfo Apolloni is a very interesting man. Born in Rome, he studied engineering, then sculpture. In 1879, he moved to Boston, where he taught sculpture and drawing. Soon he moved to Providence, Rhode Island, where he met and married Martha Holt (Cara’s ancestor). He and his wife moved to Rome in 1884, but she died in 1889, and he poured his sorrow into the Holt Monument. Thanks to Jen Snoots for these photographs of that monument.

Apolloni was quite famous in Italy. He served as president of the San Luca, a major art institution, as chair of the Royal School of Applied Art and Industry in Fano, and even as mayor of Rome. Indeed, the art institute in Fano, is the Istituo D’Arte Apolloni, named for him. It is located at 15 Via Adolfo Apolloni. In 2006, Fano mounted an exhibition of Apolloni’s work, “dedicated to the work of the sculptor who left an indelible mark on the cultural history of the city.” 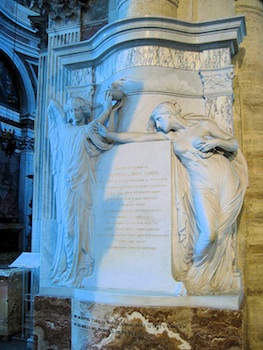 Here’s a wonderful funerary monument, by Apolloni, to Agostino Chigi, dating from 1915, in Rome’s Santa Maria de Popolo.And click here for “La Vittoria,” a sculpture by Apolloni in Rome. Check out those wings–pretty similar to those of the Valentine Angel, don’t you think?

5 thoughts on “The Apolloni Of Your Eye”