I was just doing some research on Abigail Hopper Gibbons, whom I knew had served as a nurse during the Civil War. I recently read that efforts were being made to protect the integrity of the house on 29th Street in Manhattan where she, her husband James Sloan Gibbons (who, during the Civil War, wrote the words to that toe-tapper, “We Are Coming, Father Abraham, 400,000 More”), and her children lived.

They were abolitionists and their home was a stop on the Underground Railroad, a place where slaves, on their way to freedom in Canada, sought shelter. I also knew that their home had been sacked by the mob during the Draft Riots of July 1863, when the mob went after blacks and abolitionists. Anyway, I had found an extensive account of her nursing activities, great stuff for our biographical dictionary of those who had served during the Civil War, and it repeated what I had known–that her daughter had accompanied her to the front, and had also worked as a nurse. I checked the cemetery records for the names of all of the individuals interred in that lot, but her daughter’s name was not there.

Nevertheless, all was not lost in my search–another name had caught my attention: Scipio Franks. That sounded to me like it might have been a slave name. So I did a little poking around on the Internet. Up popped a story about a Scipio Franks in the June 3, 1846 issue of the Brooklyn Eagle: a woman, Eveline Jones, a freedwoman who had been a slave in North Carolina, was living in Scipio Franks’s home. Another item in the Brooklyn Eagle of August 13, 1845, reported that Scipio Franks, a trustee of the African Methodist Church on Navy Street, had wrested a board from Ann Corneilson, who was trying to steal it from his church. And, according to the 1850 and 1860 U.S. censuses, Scipio Franks, was a black male who had been born in North Carolina about 1808 and resided in Brooklyn with Margaret Franks, who was four or five years younger than him. And, there was Margaret, likely Scipio’s wife, in that same Green-Wood lot with the Hoppers. Given these circumstances, I think we can conclude that the the Gibbons, known abolitionists who had used their home as stop on the Underground Railroad, had offered space in their lot at Green-Wood for the burial of Scipio Franks, and ex-slave, and his wife, Margaret, also likely an ex-slave. I had know about several freedmen and women at Green-Wood–this looks like two more that we have found. 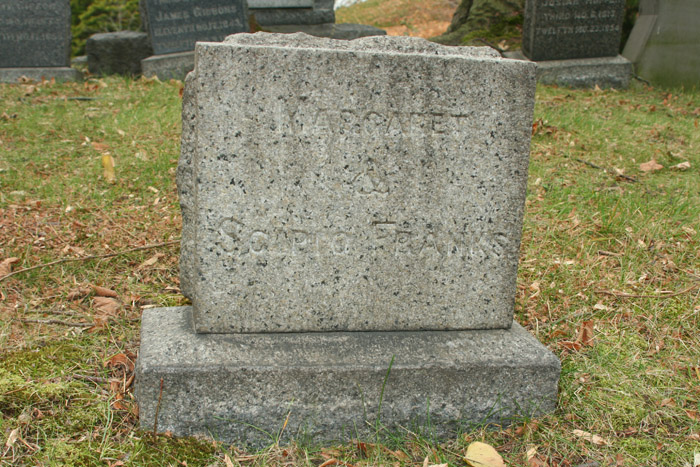 UPDATE: December 4, 2009: A very exciting update. Last week I went out to the lot at Green-Wood where these individuals are interred to check whether Scipio Franks and Margaret Franks have a gravestone. There it was, right in the front of the lot. And, interestingly, it matched several of the other gravestones in the lot–a nice touch. But I did notice that the stone on which their names were carved was a bit askew–it had separated from its base. [Update on the Update: I didn’t put a photograph of the Franks’s gravestone up in the original update because I was concerned, when it was unattached, that someone might take it. However, now that it is securely re-attached to its base, here it is]. I also noticed that two gravestones in the lot had been heaved by the roots of a large tree, and were also off kilter. And, walking to the back of the lot, I saw that the gravestones for Abigail Hopper Gibbons and James Sloan Gibbons had delaminated: the slate stone, about 4 inches thick, had come apart, and the inscribed faces of each of their gravestones, on which the carving had been done, were propped up against the stone that was still attached to the base. Now, Green-Wood Cemetery is a remarkable place. I sent an e-mail to Frank Morelli detailing these problems and asking him to see what he could do. Well, just one week later, I went back out yesterday, and Frank and his Restoration Team had already done their magic. The Franks’ gravestone has been re-attached to its base, the two stones tilted by the tree roots have been leveled, and the two gravestones that had come apart have been put back together. Here’s a view of the repair, waiting for the adhesive to dry. This kind of coordination and work makes you proud to work at Green-Wood Cemetery. Great thanks to Frank and his crew! 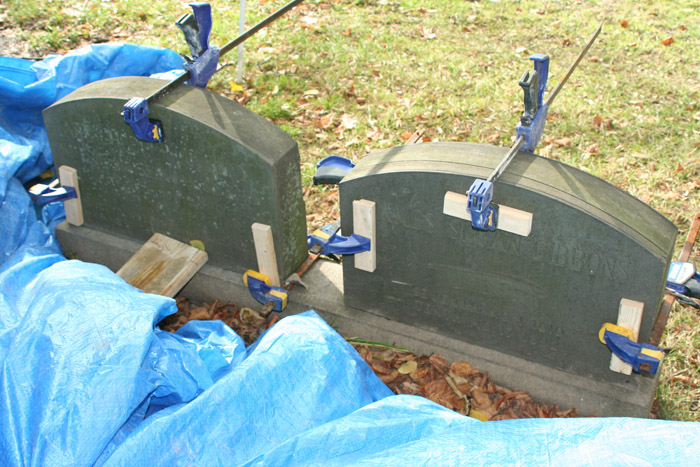 UPDATE: July, 2010. I just heard from Jennifer Scott over at Weeksville. The Weeksville Heritage Center, devoted to interpreting an historic 19th century African American community in Brooklyn, has been working with the Irondale Ensemble Theater and the Brooklyn Historical Society on “In Pursuit of Freedom,” a project to document Brooklyn’s abolition history. Starting from my research detailed above, they have uncovered some great information about Margaret and Scipio Franks. Margaret, it turns out, was born a slave in about 1815, and years later was “left free by a kind mistress.” She then left New Bern, North Carolina, for New York City. There she worked for Abigail and James Gibbons as the nanny to their children. Over years of employment, Margaret saved her wages, then combined her savings with Scipio’s and a contribution from James Gibbons to purchase Scipio’s freedom. Margaret and Scipio established their home in the Gowanus section of Brooklyn. Every Thanksgiving, the Franks joined the Gibbons for a celebratory dinner. And, the Franks worked as abolitionists themselves. Quite a story! If you have any information about abolition and Brooklyn, please contact project researchers at research@weeksvillesociety.org